STRANGERS ON A TRAIN: Week 3 of the 6 Week Film School at the Normal Theater 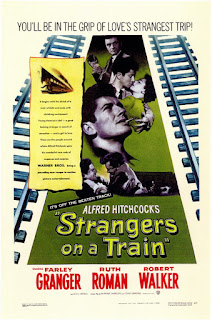 Strangers on a Train, the 1951 psychological thriller directed by Alfred Hitchcock, is a direct descendant of the first movie in the Normal Theater's Six Week Film School -- Shadow of a Doubt -- with the same rapid escalation of tension, the same kind of charmingly psychotic killer, and the same cruelty towards the women in its cast of characters.

What Strangers on a Train has that Shadow of a Doubt doesn't is a diabolically good hook. Strangers on a Train is what you might call "high concept" before that idea became popular. What it's about -- two strangers meeting on a train and one proposing they "exchange" murders so they can both get rid of inconvenient people without getting caught -- is right there in the title.

Yes, Guy and Bruno are strangers. And they meet on a train. What seems like an innocuous conversation turns creepy quickly, however, when Bruno, the affable psychopath, offers to kill Guy's greedy wife (she's pregnant, but not by him, and she won't divorce him), if Guy will knock off Bruno's annoying father. It's based on a Patricia Highsmith novel of the same title. Highsmith's Strangers has some significant differences, even if the basic idea -- the murder swap that Bruno proposes -- is the same. Highsmith makes it grimmer and more cynical, but I prefer Hitchcock's version, created by screenwriter Czenzi Ormonde from a treatment by Whitfield Cook after Hitchcock reportedly tossed out what famed mystery novelist Raymond Chandler had provided.

Highlights of the film include Farley Granger's performance as Guy, the handsome tennis star with decent impulses but some definite shades of gray, Robert Walker taking Bruno into unsavory territory and then some, a famous back-and-forth tennis match, more than one pair of eyeglasses, a distinctive lighter, and a dizzying carousel ride. If you're a fan of TV's Bewitched, you may also enjoy seeing Samantha's Aunt Clara (Marion Lorne) as Bruno's indulgent mother.

Strangers on a Train is really, really good at ratcheting up suspense. That will be even more apparent on the big screen at the Normal Theater, offered free tonight at 7 pm as part of Professor Bill McBride's Six Week Film School. You'll find supporting materials and food for thought here on the Normal Theater website.
Posted by JulieK at 4:31 PM 1 comment: 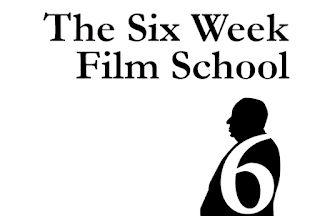 Tonight is Week 2 of Bill McBride's Six Week Film School at the Normal Theater. Professor McBride hosted a Film Noir series last fall, but this time he's focusing on Alfred Hitchcock. It doesn't get any better for film students than Hitchcock, the master of suspense who was also a master of "the stylized language of cinema." You'll find Hitchcock movies on almost every film school syllabus because he employed so many different cinematic techniques to create suspense and keep his audience connected as well as recoiling.

I'm sorry I'm a week late to talk about Shadow of a Doubt, the creepy "Merry Widow Murderer" movie that centers on a family in a small town and how young Charlie (played by Teresa Wright) unravels the mystery of her charming Uncle Charlie (the reason she got her name) and just why he's come to visit after so long. Joseph Cotten, a warm, appealing actor, creates a portrait of Uncle Charles that's all the more creepy because he seems like such a regular guy. Hitchcock casts evil into the midst of an apple-pie sort of town, with a Little Charlie/Big Charlie duality that makes all of us feel guilty.

Notorious, this week's Hitchcock, is one of his best, too, with another sympathetic villain in Claude Rains' Alexander Sebastian, who happens to be a rich Nazi hanging out in South America in 1946. The minute I said "Nazi" I'm sure you jumped back with "Sympathetic? A Nazi?" but it's Sebastian's love for Alicia Huberman, the "notorious" woman in the title, played by Ingrid Bergman at her most luminous, that makes him sympathetic even as it proves his undoing. Alicia is the daughter of another Nazi, one who's been uncovered and prosecuted in Florida before the movie starts. Dark and devilish spy Cary Grant (it's no coincidence his character's name is Devlin) puts Miss Huberman between a rock and a hard place (sexual innuendo intended) when he forces her to get close to Alexander Sebastian to infiltrate the gang of bad guys.

The sexual politics in the film are definitely dicey -- let's just say in today's world it could've been called "Slut Shaming" just as easily as "Notorious" -- and Devlin is a rat if ever there was one. Because of her father's crimes and her own reputation as a party girl, Alicia is a pawn in a game created by a whole lot of controlling, judgmental, cruel men. It doesn't matter to Devlin if he punches her or pimps her out or almost kills her. He's handsome. He's cynical. His important big-guy spy stuff is much more important than any woman. And, in fact, the notion that all the punishment Alicia gets may just be what she deserves to clean away the "spots" of her sexuality is definitely present.

Hitchcock was often creepy about his female characters and the way he treats Alicia Huberman is no exception, even as she does show a certain agency as a sleuth and we are given some focus on her point of view. Bergman's big-screen persona and charisma function to give her character both sensuality and virtue, to make her seem like a real, three-dimensional human being, no mere victim or paper doll to be cut to size. We know she's good and honorable, no matter how notorious she is or how many smutty comments a roomful of American agents toss her way. In the end, the fact that she has been known to drink to excess and have sex, including with Devlin and Sebastian, makes her more sympathetic and attractive, not less.

It doesn't hurt that Cary Grant has his own big-screen persona and charisma working on all cylinders and the sparks Bergman and Grant create together make Notorious work really, really well.

The famous sweeping shot to a key in Bergman's hand, a huge coffee cup, smoke and mirrors, the use of light and shadow, off-kilter angles, flipping point-of-view, a staircase of doom, the MacGuffin in a wine cellar... And the sexual politics. All fodder for a ripping good discussion of Hitchcock as a cinematic artist.

Notorious will be screened tonight at 7 pm at the Normal Theater. The movies included in the Six Week Film School are offered free of charge, and the program includes a post-show discussion with Professor McBride. Click here for McBride's notes on the film, including links to some excellent reading material.

Next week: Strangers on a Train. After that, McBride's schedule includes Vertigo, Psycho and The Birds.
Posted by JulieK at 1:13 PM 2 comments: