Score One for the Girls: THE WOLVES at the Goodman's Owen Theatre 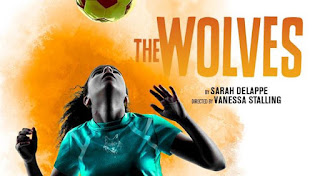 Against all kinds of obstacles, women in theater have thrown down the gauntlet on more than one front. Freedom from harassment, decent access to directing, design and stage management jobs, consideration for women playwrights and actors when artistic directors are choosing their seasons... It's all on the table. And it only makes sense. If you look around when you go to the theater, you already know that audiences are more likely to be made up of women. But how have theaters responded? Is anything getting better? From my perspective, the answer is yes and no. Locally, we've seen some progress*, a continuation of good work**, and a decided retreat into Same Old Same Old White Guy Theater***. But Chicago's Goodman Theatre has taken the ball and run with it, with programming like Sarah DeLappe's The Wolves, directed by Vanessa Stalling, who earned her MFA in directing at Illinois State University.

The Wolves is a wonderful choice, an inside look at a team of girls playing soccer and what's important to them. Stalling is the perfect director for it, too, with her emphasis on the physical side of theater, and appreciation for women on stage who can "look strong, be aggressive or take up space." That is exactly what these soccer players do as they run through practice, joke around, pick at issues they may not exactly understand, vie for playing time, and struggle with things like friendship, teamwork, sexuality, parents and mortality. None of it is revolutionary, just new, because somebody is finally listening in to teenage girls who find joy in strength and competition, pushing and kicking their way in a world that isn't all that welcoming.

DeLappe's script uses overlapping, fragmented dialogue that kicks around in a much less disciplined fashion than the drills the girls are running, veering from global atrocities to yogurt, yurts, tampons and maxi pads with breathless speed. Both the dialogue and the action are choreographed and tricky, but Stalling keeps her actors on their toes throughout the play and together, they drive the narrative perfectly. Whether or not any of these women actually played soccer during their high school years, they've brought their skills up to a level that reads like the real thing. Their stamina and focus are amazing.

As #46, Erin O'Shea stands out both with her soccer prowess as well as her acting, delivering emotional depth as an outsider who can't quite figure out the social cues that come so easily to her teammates. ISU grad Cydney Moody is a delight as #8, the more naïve one who falls apart when she finds out that the national tournament will be in Tulsa instead of Orlando, while Sarah Price makes smart girl #11 a real treat. I also enjoyed Isa Arciniegas as the no-nonsense captain of the team, Taylor Blim as a sweet girl who shows signs of an eating disorder, Angela Alise as the stressed-out goalie, Mary Tilden as a goofball whose jokes don't exactly land, and Aurora Real De Asua and Natalie Joyce as the most socially advanced of the bunch. Meighan Gerachis arrives late in the game, but she makes quite an impact with a heartbreaker of a monologue.

The Wolves is staged in the round (or rectangle) in the Goodman's Owen Theatre, with the audience up close to the action. Set Designer Collette Pollard has created a simple but effective space lined with artificial turf and surrounded by netting that allows for in-your-face athletics. Mikhail Fiksel's sound design and Keith Parham's lighting design add a blast of energy, as well.

Because it has proved so popular, The Wolves has been extended past its original end date. That means you can still see it through March 18 if you can get a ticket.

THE WOLVES
By Sarah DeLappe

The Owen Theatre at the Goodman Theatre
February 9 to March 18, 2018


* Illinois State University has done excellent work in spotlighting plays by women, people of color and from authors outside the United States, in its last two seasons. In Urbana, the Station Theatre is devoting most of its current season to women playwrights and women directors.

** New Route Theater in Bloomington-Normal continues its mission of giving a voice to underrepresented communities and ethnically and culturally diverse playwrights.

*** Heartland Theatre has just announced a new mainstage season that will be 100% white male voices, after two seasons with paltry representation (a play by Anna Zeigler in 2017 and book and lyrics by Tina Landau in this year's Floyd Collins are the sole contributions of women) and more than double the number of roles available to men over those seasons.
Posted by JulieK at 1:03 PM No comments:

The American Theatre Critics Association has released the names of the six finalists for the 2018 Harold and Mimi Steinberg/ATCA New Play Award, which spotlights playwrights for professionally produced work premiering outside New York City. The Steinberg/ATCA Awards hand out $40,00 each year, making these awards the largest national new play program of its kind.

This year's finalists are The Book of Will by Lauren Gunderson, Cry It Out by Molly Smith Metzler, Linda Vista by Tracy Letts, The Minutes by Tracy Letts, Objects in the Mirror by Charles Smith, and The Wolf at the End of the Block by Ike Holter. Chicago is strongly represented in this group, with two plays from Letts that premiered at Steppenwolf, Smith's play from the Goodman Theatre, and Holter's play, which was presented by Teatro Vista at Victory Gardens.

Here's how the ATCA committee describes the plays chosen:


The Book of Will by Lauren Gunderson, about the efforts of Shakespeare's contemporaries to preserve his words after his death, "fires on all cylinders" according to one panelist. Said another, it "wrestles with big questions: Why we create and how we deal with death? What constitutes a legacy? And how a surpassing love for something bigger can make every sacrifice worth it." It's "all the more impressive given that we know how the story will end." "And it's funny — genuinely funny — in a way that feels contemporary and yet not cynical." The Book of Will had its world premiere at the Denver Center for the Performing Arts.

Cry It Out by Molly Smith Metzler focuses on the bonds and barriers between two new mothers across a backyard and across class differences. According to panel members, it is "heartbreakingly original in wrestling with issues of female friendship and class and privilege while still being a story about two people one quickly feels strongly about." "Their challenges come across as very real and accessible without being trivialized." Cry It Out premiered at the Humana Festival.

Linda Vista by Tracy Letts focuses on "a man-child who is lonely and wants to be loved — while remaining too immature to do the work involved in making that happen." With, according to a panelist, some of the "smartest, funniest dialogue of any play this year, it also features female roles exceptionally fresh and well crafted." "Letts runs it out of control and then brings it back," said another. It features, "smart observations on marriage, fatherhood, and aging" and, noted yet another, "It's like getting smacked with a metal ruler while someone's telling jokes." Linda Vista premiered at Steppenwolf Theatre Company in Chicago.

The Minutes, also by Tracy Letts, reads like "this is Grover's Corners and Winesburg, Ohio through the eyes of Shirley Jackson." It's "a very weird roller coaster ride" through an absurd town council meeting that leads to "a magnificent tribal reveal soaked in the saddest truth about humanity." "I could see where this would be an actor's and director's dream with a WOW finish." The Minutes also premiered at Steppenwolf Theatre Company.

Objects in the Mirror by Charles Smith "compellingly takes us into the mindset of the masses of refugees fleeing wars and other violence and their struggle against great odds to survive and escape." It's about both "the price of immigration, and the importance of identity, with a second act that feeds on the first act in clever ways but takes us in a new direction." "I was also moved," said one panelist, "by the identity crisis at the heart of the play—the hunger to reclaim a self and name that no longer belong to you." It conveys "a great deal about how worlds apart people can be, how different their ideas of how to help." Objects in the Mirror premiered at Chicago's Goodman Theatre.

The Wolf at the End of the Block by Ike Holter is, according to one panelist, "a play I can't get out of my head, from one of the most exciting emerging voices in American theater." It "melds gorgeous, often comedic dialogue into a very dark reality" in "a play that matters." Centered on a beating outside of a Chicago bar, it's "honest about how flawed the would-be heroes of the piece are — refreshing, given the amount of paint-by-numbers agitprop out there right now." Presented by Teatro Vista, The Wolf at the End of the Block premiered at Chicago's Victory Gardens Theater.

These six finalists were selected from eligible scripts recommended by ATCA members from across the country.  To read about the history of the Steinberg/ATCA awards and see past winners, click here.

The top award of $25,000 and two citations of $7,500 each, plus commemorative plaques, will be presented April 7 at the 2018 Humana Festival of American Play at Actors Theatre of Louisville.
Posted by JulieK at 9:41 AM No comments:

Oscars, Year 90, Now One for the Books 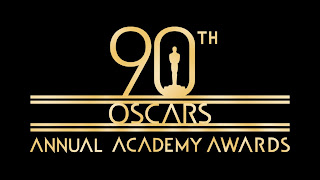 In a year when some of the biggest Oscar drama happened on the red carpet, with lots of speculation that the major stars would be sidestepping E! network's Ryan Seacrest, things shaped up pretty well and pretty much as expected inside the 90th annual Academy Awards ceremony. Jimmy Kimmel was an affable host, the proceedings went along smoothly with no major gaffes, and there were undoubtedly a lot of ties for prizes at Oscar parties. 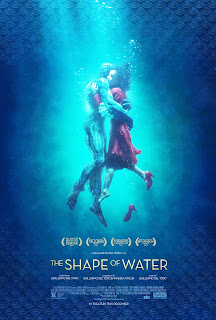 In the biggest categories, Guillermo del Toro and his Beauty and the Beast story, The Shape of Water,  emerged victorious, scooping up Best Picture and Best Director to go with awards for its score and production design.

Three Billboards Outside Ebbing, Missouri won two of the big acting awards with Best Actress for Frances McDormand and Best Supporting Actor for Sam Rockwell, while first-time producer/director/screenwriter Jordan Peele walked away with the Best Original Screenplay trophy for Get Out and 89-year-old James Ivory became the oldest Oscar winner ever with his win for his adapted screenplay for Call Me By Your Name.

Adding a little more fuel to the fire that real (as opposed to fictional) characters are more likely to win awards, Gary Oldman won Best Actor as Winston Churchill in Darkest Hour and Allison Janney added to her awards season sweep as Tonya Harding's horrible mother in I, Tonya.

Dunkirk won for its film and sound editing as well as sound mixing, while Blade Runner 2049 picked up awards for its cinematography and visual effects.

Disney/Pixar's Coco won as Best Animated Feature, with songwriters Kristen Anderson-Lopez and Robert Lopez winning with their sweet song "Remember Me" from that film.

BEST PICTURE
Call Me by Your Name
Darkest Hour
Dunkirk
Get Out
Lady Bird
Phantom Thread
The Post
The Shape of Water
Three Billboards Outside Ebbing, Missouri

BEST ORIGINAL SONG
"Mighty River" from Mudbound, Mary J. Blige
"Mystery of Love" from Call Me by Your Name, Sufjan Stevens
"Remember Me" from Coco, Kristen Anderson-Lopez and Robert Lopez
"Stand Up for Something" from Marshall, Diane Warren and Common
"This Is Me" from The Greatest Showman, Benj Pasek and Justin Paul