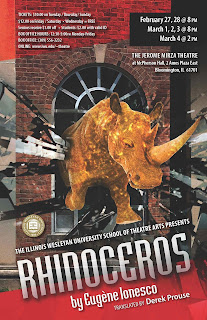 Eugène Ionesco was really big in the 70s, when I came of age. My junior high theater teacher assigned two of his plays (The Lesson and The Bald Soprano) for a whole semester's worth of class work. I seem to recall Ionesco in my French textbook, including an image of a nose shaped like a circular stair. And I saw (and fell in love with) Rhinoceros when another high school used it for its contest play. There was no actual rhinoceros in that one, just puffs of dust as they supposedly ran by and physical work by the actors whose characters turned into them. The 1974 movie starring Gene Wilder and Zero Mostel, who'd played the same role in the 1961 Broadway production, also eschewed real rhinoceroses in favor of Mostel chewing the scenery. But the Guthrie Theater in Minneapolis built immense rubbery rhino outfits for their production in the 80s. And that, too, worked like a charm. Or a rhinoceros.

Whether Illinois Wesleyan University is giving their prop and costume people a rhino-sized workout remains to be seem. But their own Rhinoceros, that timely parable about regular people inexplicably embracing the beasts inside (and outside) to go along with the crowd, opens tonight at 8 pm at the Jerome Mirza Theatre at McPherson Hall on the IWU campus.

Here's how IWU's press materials describe their take on Rhinoceros:


The sublime is confused with the ridiculous in this savage commentary on the human condition. A small town is besieged by one roaring citizen who finds himself turning into a rhinoceros and who proceeds to trample on the social order. As with any "disease," more citizens become infected. "An allegory for our times." - The New York Times "It’s satirical humor, combined with its provocative theme and surprisingly moving ending, results in an evening that is strange, disturbing and arresting." - New York Post

Rhinoceros runs from February 27 to March 4, with performances at 8 pm Tuesday through Saturday and a matinee at 2 pm on Sunday. You can order tickets online here or call the box office at 309-556-3232.
Posted by JulieK at 3:02 PM No comments: 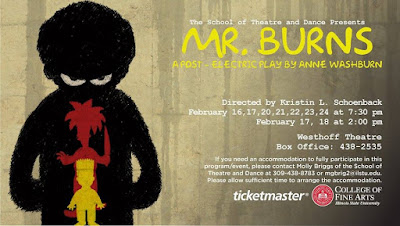 Anne Washburn's Mr. Burns: A Post-Electric Play has been around since 2012, but it seems even more timely now than it did then. Are we edging closer to the kind of apocalypse Washburn envisioned? Probably. As other playwrights and authors continue to grapple with the end of the world, Washburn is the only one that uses The Simpsons, blending pop culture, humor and wit into her dystopic nightmare.

Washburn opens with a small group of survivors after some kind of nuclear meltdown. They are sitting around a fire, trying to occupy themselves by retelling a classic Simpsons episode, the one where Sideshow Bob plots to kill Bart by trapping the whole family on a houseboat. That's the "Cape Feare" episode, riffing on Cape Fear, the 1991 movie remake of the previous Cape Fear from 1962. As the survivors in Mr. Burns focus on the fragments of "Cape Feare" they can remember, they also drop desperate pieces of information about their current reality, the one where whole cities lie empty, supplies are limited, almost everyone is dead or missing, and the few who are left are wary of everyone else, guns at the ready.

From this minimalist beginning, we move seven years into the future for Act II, where the campfire group from Act I plus a few new friends are part of a traveling troupe of players whose stock in trade is now performing "Cape Feare," complete with commercials for things like chablis and Diet Coke, goodies they remember from their pre-meltdown life. We learn there are other rival companies trying to monopolize The Simpsons turf, lines from the show have become a sort of currency, and surviving is still a cut-throat business.

And in Act III, 75 years farther along, we see just how far this storytelling odyssey has taken humanity, as they now use Simpsons characters like Homer and Bart in a grand mythic pageant. The Simpsons -- or at least a version transformed, overwritten and mixed up by 75 years of retelling -- has become the ritual and scripture of the new world, layered with new meaning to try to make sense of what happened way back when.

By the end, Illinois State University's production of Mr. Burns: A Post-Electric Play plays like Greek tragedy, liturgy and Simpsons cosplay put in a blender, and that's exactly as it should be. Director Kristin L. Schoenback keeps the pace humming, with the necessary snap and crackle to hold an audience over three acts, and a strong overall vision of how and why we build stories.

The entire company is strong, doing equally well with the spontaneity of the early going and the stylization of the end. Thomas Russell and Johanna Kerber carry the narration nicely in Act I, while Megan Compton and Owen McGee step up as wannabe actors in Act II, and Sarah Ford and Everson Pierce face off sharply in Act III.

Scenic designers Allison McCarthy and John C. Stark, costume designer Amanda Bedker, lighting designer Laura Gisondi and properties manager Nick Chamernik make valuable contributions to the edgy and striking visual landscape that shifts from a dark campfire to a quick-and-dirty world of found objects and then a golden temple. I'm not sure who was responsible for the masks, but they're pretty nifty, too.

Choreographer Mattilyn Nation and fight choreographer Paul Dennhardt deserve credit for keeping things moving when they need to, and sound designer Morgan Hunter, music director Pete Guither and "chart hit" composer Jordan Coughtry up the ante on the aural side.

All in all, this Mr. Burns is provocative and snarky, with all the jagged pieces in place. It's also a helpful reminder to start memorizing Simpsons episodes now. You may need them in the coming nuclear apocalypse.

The School of Theatre and Dance at Illinois State University
Westhoff Theatre
February 16 to 24, 2018

Running time: 2:30, including two 10-minute intermissions.
Posted by JulieK at 3:07 PM No comments:

ASSASSINS Is a Misfire at U of I 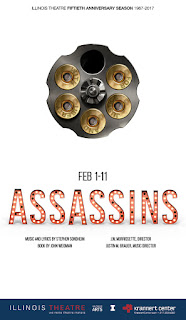 In Look, I Made a Hat, Stephen Sondheim's book that collects and discusses lyrics he wrote from 1981 to 2011, he talks about the genesis of the show Assassins, which he describes as a "book musical masquerading as a revue, featuring nine of the thirteen assassins who have attempted to kill the president of the United States."

It's an odd idea for a musical, perhaps, to look at the infamous assassins who have slithered around the underbelly of America, but no stranger than murderous women in Chicago in the 20s or the midlife  crisis of an Italian director or Sondheim's own forays into loony bin inmates and a barber consumed with razor-sharp revenge. But perhaps because its subject matter seemed "a little wrong," Assassins was produced off-Broadway first, at Playwrights Horizon, in 1990, with a cast that included Victor Garber, Terrence Mann and Debra Monk among its assassins. It's been steadily produced since then, with a very strong production at Urbana's Station Theater all the way back in 1992, and a splashy revival on Broadway in 2004 that earned a Tony for Michael Cerveris. Along the way, through London and San Jose and St. Louis, Assassins has been adjusted a bit here and there, including the addition of a song, but its basic structure, that book musical masquerading as a revue, remains constant.

Sondheim called John Weidman's book "a collage," and that's as accurate as anything, mixing people from different times in American history, working within its own time and space, overlapping pointy, sharp-edged pieces of the American Dream with gunpowder and fried chicken, with a sense of the theatrical infusing its grimy deeds. At its heart, it's a small musical, one that works just fine in a black box theater. (See: Station Theater production mentioned above.) That means it should be fine in the University of Illinois Studio Theatre in Krannert Center for the Performing Arts. And yet... It isn't.

Director J.W. Morrissette and scenic designer Daniela Cabrera rely on thin candy-cane-striped scaffolding and a circular stair set against the east side of their black box, with seating on the other three sides. There are signs and ephemera scattered here and there, with big dollar signs or "the right to bear arms" or other evocative phrases painted on set pieces, strings of twinkly lights, and a nine-piece orchestra tucked under the narrow platform that spans the top of the scaffolding. Unfortunately, Morrissette has chosen to play significant scenes on that gallery, up there next to the ceiling, which is hard to light and hard to see from major portions of the audience. And the orchestra is pitched too loud and too close, often drowning out singers valiantly trying to negotiate Sondheim's lyrics. Since this is a show that tells its story through its lyrics, that's a big problem.

Morrissette has the benefit of MFA actor Jordan Coughtry as John Wilkes Booth; Coughtry has the vocal and acting skills to make his part of the narrative really sing. Yvon Streacker is also good as Guiseppe Zangara, the man who tried to kill FDR, and the other members of the ensemble have good moments, but they are too often hampered by staging that leaves them isolated and distant from their fellow players and choreography that seems chaotic and messy. As a result, the pace and the individual characterizations suffer.

I saw the show on opening night and it may be that the pieces will gel as it continues its run, that everyone will settle in and find the truth instead of indicating the drama in their characters. I hope so. Assassins is too good a show for missed opportunities.

Assassins continues through February 11 at the Studio Theatre at Krannert Center for the Performing Arts in Urbana. Although there is currently a waiting list for every performance, there were quite a few empty seats on the night I saw the show, which should mean there's a chance you'll get in from that waiting list.
Posted by JulieK at 1:41 PM No comments: