Kathleen Kirk's "Living on the Earth" 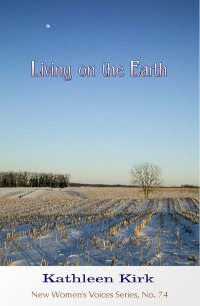 Local poet Kathleen Kirk shares information about her new release with us.

Living on the Earth, by Kathleen Kirk, poetry chapbook to be published by Finishing Line Press in spring 2010 in their New Women’s Voices series; expected release date, April 30, 2010.

This is a book, quite simply, about “living on the earth” in some pretty basic ways: standing and walking with the earth’s gravity, eating what grows on the earth and even cultivating our food, living among the beauties of nature, living with earth’s various creatures, living with other humans, and living with our own struggles and imperfections. Sometimes it even means living with alienation—there’s a poem called “Living on the Moon” in which I imagine literally living on the moon as a way of expressing the feeling of being alienated from fellow citizens of earth. There’s another called “Resurrection on the 4th of July” in which I imagine I have come back to life (like a lady Lazarus) from some period of deathlike estrangement. But most of the poems are set in nature or my own backyard, observing the gently cultivated nature of gardens, say, or a spider interacting with a water bottle or a laundry basket. In another poem I encounter a coyote in the parking lot of a swimming pool in my own hometown; he’s hungry enough to come into town for pigeon roadkill. What does that say about 21st-century American life? In this book I look at cornfields and wildflowers, I listen to women and crickets singing, and sometimes I become things other than myself.
--Kathleen Kirk


What others have said, via testimonial blurbs for back cover:

These smart, elegant poems—speaking to us sometimes in the voice of a lover, once in that of a resurrected body, occasionally as if from within a flower or from a crater on the moon—invite us to see the natural world and ourselves with renewed wonder and delight. And they move us to see beyond the known world so as to engage with yet another level of pleasure that can only be called spiritual. They are lyrical love poems to the earth and to our human capacity to cherish it.
--Bill Morgan, author of Sky With Six Geese

Kathleen Kirk's poems remind us of what a gift and mystery it is to reside on this living entity called Earth. Sometimes she is astute observer, sometimes grateful inhabitant of the very objects she writes about, but always the bearer of a very necessary message. As she writes, "It's hard to give up/ a belief in kindness/ when even the heads of wildflowers/ bow down in the yellow rain,/ when a whole bean field goes gold/ in the push to harvest." These are poems for a wounded world so much in need of kindness.
--Judith Valente, author of Discovering Moons

Kathleen Kirk’s upcoming poetry chapbook, Living on the Earth, is available for pre-order now, with a release and shipping date of April 30, 2010. Advance orders are very helpful in determining the print run and keeping publication on schedule. To order by mail, send a check for $14 + $1 shipping, per book, to
Finishing Line Press
P. O. Box 1626
Georgetown, KY 40324

You can also order online, via PayPal, at the New Releases page of Finishing Line Press:
http://www.finishinglinepress.com/NewReleasesandForthcomingTitles.htm

Living on the Earth contains poems of earnest spiritual questing, human connection and alienation, and straightforward observations of nature, culture, and agriculture. The cover photograph of a cornfield in winter is by local photographer Ken Kashian.

After the book is released it will be available at Babbitt’s Books in Normal, and online at Amazon.com, as is her current chapbook, Broken Sonnets. Online ordering for non-new releases at Finishing Line moves to their Bookstore page, which links to Amazon, and Amazon links back to Finishing Line Press. Babbitt’s also carries Kirk’s first poetry chapbook, Selected Roles, which contains theatre and persona poems and references to Heartland Theatres in its “program notes.”

I was ready to open: dew hung from my leaves.
I was like all the others
in a wet thicket beside the tall trees.
A boy asked me why I didn’t kiss him—
so I did, his lips soft as petals, closed.

You are waiting now for what will happen
next. I cannot tell you. I wait, still.
I have spread into the damp meadow now,
toward the ragged creek. The meek, the meek,
I pray daily, bare toes digging in.

“Blind Gentian” appears online in the current issue of Apparatus Magazine at:

http://www.apparatusmagazine.com/V1I7Cover.html
Posted by JulieK at 11:13 AM