Hamlet may be 400 years old (and then some), but the Danish prince and his sea of troubles have never been more popular.

Blown Youth, a play inspired by Hamlet, just finished its run at Illinois Wesleyan, while the real deal Hamlet is on the schedule for IWU's McPherson Theatre next spring. Hamlet is also part of the recently announced slate for next summer's Illinois Shakespeare Festival, with actress Deb Staples, who played both Cleopatra and Queen Elizabeth I for the Festival in 2014, as the melancholy Dane.

And then there's the current Barbican production of Hamlet starring Benedict Cumberbatch. This one has been a hot ticket on the fall English theatre scene, as you might expect. It's Benedict Cumberbatch, after all. Sherlock! Khan! Alan Turing! He's done Frankenstein (both the doctor and the monster). He's done Richard III. He's not old enough for Lear. So Hamlet it is. 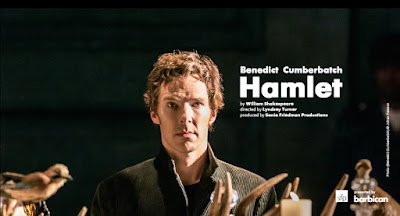 Luckily for those who haven't been able to get a ticket or don't happen to be in London, National Theatre Live is sharing the Cumberbatch Hamlet on movie screens all over the United Kingdom and the United States. Most theatres are showing Hamlet tomorrow, October 15, including the Savoy16 south of Urbana as well as theatres in Orland Park, Chicago Heights and Woodridge.

If you miss it tomorrow or have other plans for your Thursday night, never fear. The Art Theater Co-op in Champaign will offer encores of this National Theatre Live performance on Sunday, November 1 and Wednesday, November 4. You can click either of those National Theatre links for more information on where and when you can see it.
Posted by JulieK at 8:34 PM