The Illinois Shakespeare Festival has announced its 2016 line-up of summer plays. And the winners are...

Hamlet, Twelfth Night and Peter and the Starcatcher!

Hamlet and Twelfth Night are the Shakespeare choices, obviously, with Rick Elice's  Peter and the Starcatcher taking the "other" spot. That wildcard slot has been filled in recent years by funny, fizzy stuff like the Reduced Shakespeare Company's The Complete Works of William Shakespeare (Abridged) -- twice -- and last year's Q Gents, the Q Brothers hip-hop take on Two Gentlemen of Verona, as well as classics like Richard Brinsley Sheridan's The Rivals and an updated version of Scapin, plus newer, less easily pigeon-holed material like Philip Dawkins' Failure: A Love Story. 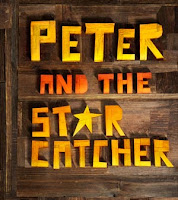 Elice's Peter and the Starcatcher, a prequel of sorts to the Peter Pan story, is both fun and energetic, with a little music and a lot of imagination and high-flying movement, meaning it should fit in just fine at the Shakespeare Festival. Elice adapted the play from a 2006 children's book with as similar name written by Dave Barry (yes, the Pulitzer Prize-winning newspaper columnist) and Ridley Pearson (New York Times best-selling author). The play was directed by Elice's husband, the late actor Roger Rees, and Alex Timbers, with a 2009 production at California's LaJolla Playhouse, followed by an off-Broadway run in 2011, a Broadway production that opened in 2012, and an another off-Broadway run after that. The Broadway version of Peter and the Starcatcher (whose logo you see here) was nominated for nine Tony Awards, winning for its scenery, costumes, lights and sound, and bringing Christian Borle a Tony for his performance as "Black Stache," the forerunner to Captain Hook.

Hamlet's last appearance at the Illinois Shakespeare Festival was in 2004, but I have stronger memories of the 1997 production, when it was played in repertory with Rosencrantz and Guildenstern Are Dead, the Tom Stoppard play which takes two of Hamlet's minor characters and looks at the action from their point of view. The 1997 production set Prince Hamlet and the rotten court of Denmark in the early part of the 20th century, with a doomed aristocratic look that reminded me at the time of Brideshead Revisited. Now I think we would say upstairs at Downton Abbey, but the idea is the same -- the melancholy and madness of a privileged son in an age of privilege. It's impossible to guess where they will take Hamlet this time, since pretty much everything has been tried somewhere, from Hamlet on a blank stage to a Russian fugue state, Star Trek's holodeck, a corporate boardroom, a repressed 1950s European kingdom, and an urban jungle where the title character is an angtsy rebel in a T-shirt and jeans. As well as, of course, a traditional Elizabethan setting where Hamlet wears black tights and a doublet. The possibilities are endless. 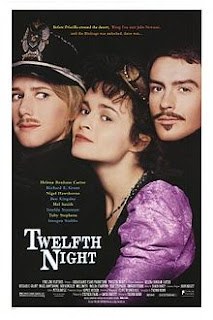 As for Twelfth Night... The Illinois Shakespeare Festival famously began its history with a production of the play directed by Dennis Zacek that was described as "futuristic space age" in tone and I seem to recall a Dickensian Christmas production as well as one that looked a bit like the Arabian Nights. Viola, the ship-wrecked twin dressed as a boy who wanders into Duke Orsino's court and falls in love, is one of Shakespeare's brightest, most charming heroines. Orsino and Olivia, the other two legs of the romantic triangle, can be a bit soggy, given that he's pining after her and she's in mourning and having none of his overtures, but they can also be quite wonderful in the right hands. And the supporting players -- a drunken oaf named Sir Toby Belch, his silly friend Sir Andrew Aguecheek and Malvolio, Olivia's uptight steward -- can also be hilarious or wrenching, depending on how they're handled. I recall an Illinois Shakespeare Festival production in the mid-90s with actor Frank Nall slipping into Malvolio's yellow stockings where it all worked like a charm. The 1996 film version with Imogen Stubbs and Helena Bonham Carter was also lovely. (See poster above.) Fingers crossed for another one like that either of those!

The Illinois Shakespeare Festival will begin its 39th season with preview performances on July 5,6 and 7, and official opening nights on July 8, 9 and 10. You can visit their Facebook page here or check out their website here.
Posted by JulieK at 10:23 PM