The Tragedy of War: TROJAN WOMEN Takes the Stage Tonight at ISU

You won't find many 2400-year-old plays that survive and flourish in the 21st century. But that is exactly what The Trojan Women has achieved since Euripides brought his play to the theater competition at the City Dionysia festival in 415 BC, during the Peloponnesian War. The Trojan Women came in second that year. The obscure playwright who won doesn't really matter, because Euripides and The Trojan Women have triumphed where it counted. They're still here. 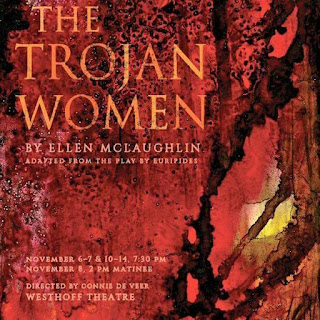 Among Greek tragedians of the time, Euripides was not as big a name as Aeschylus and Sophocles, who racked up far more Dionysian victories than he did, but by the 18th and 19th centuries, English poets were lauding him and writing odes in his honor. Elizabeth Barrett Browning famously called him:

Our Euripides, the human,
With his droppings of warm tears,
And his touches of things common
Till they rose to touch the spheres.

There's something in the "common" and "human," as well as a focus on women, that helps explain why modern writers like Jean-Paul Sartre and Ellen McLaughlin (not to mention Carole Braverman and her Yiddish Trojan Women) have been drawn to translate and adapt his work. After all, there has always been war and women have always been used and abused as "trophies, spoils, baggage," as McLaughlin's script puts it.

Connie de Veer, who is directing The Trojan Women (and McLaughlin's adaptation) for Illinois State University's School of Theatre and Dance, echoes that thought. "The Trojan Women is an anti-war play that focuses chiefly on the costs of war levied on women," she writes in her director's note for the play. "The women of Troy suffer colossal losses -- of loved ones, home, identity, status, selfhood, purpose, and finally, ownership of their own bodies. Sadly, such is the nature of war to this day."

De Veer goes on to quote Grace Halsell and an article in The Washington Report about the fallout on women after the Serbian war. Halsell says, "... women have always suffered from rape--especially during wartime. Helen of Troy was a war trophy. So was Cleopatra. They go under the heading: to the victor belong the spoils. Rape was always regarded as an inevitable by-product of war."

Recognizing that and personifying the consequences of war is exactly what The Trojan Women is all about. With their city reduced to a pile of ash behind them, these sisters, wives and daughters face a future of exile, rape, slavery, and endless mourning for the parade of loved ones they've lost.

Although that kind of climate may seem difficult for today's college kids to access, de Veer gives credit to her actors and designers. In her words, they "have worked courageously and honestly to access their own grief, loss, and longing in order to tell this story with truth, passion, and compassion. We hope our efforts invite you to do the same, uniting us all across barriers of culture and time, in the universal and inevitable hard work of grieving."

Scenic designer is Samantha Gribben, Anna Hill designed the costumes, Kyle Techentin did props and Hannah Beaudry is in charge of hair and makeup for the production, while Laura Bouxsein is stage manager.

The Trojan Women begins tonight at Illinois State University's Westhoff Theatre, with performances continuing through November 14. For information, click here. For tickets, you can call the box office at 309-438-2535 or go directly to Ticketmaster.
Posted by JulieK at 1:27 PM