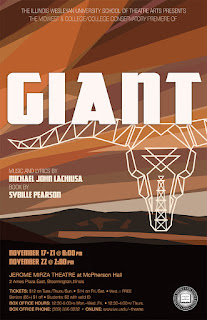 If you have an opinion of Giant, it's probably based on the 1956 movie, a big, technicolor extravaganza as big as its Texas setting, starring Rock Hudson, Elizabeth Taylor and James Dean. The movie script was a little different from its source material, a popular novel by Edna Ferber, mostly to make the character of Jett a better fit for James Dean, but both paint a panoramic picture of the Giant in the title. That Giant is Texas itself, as oil men, ranchers and cowboys stake their claims between 1925 and 1952.

Giant came along for Ferber after she was already a best-selling novelist and successful playwright, with books like So Big, for which she won a Pulitzer Prize in 1924, Show Boat, Cimarron and Saratoga Trunk, quickly turned into movies, and hit plays Stage Door, The Royal Family and Dinner at Eight, all co-written with George S. Kaufman. Show Boat was also adapted into a much-loved stage musical with book and lyrics by Oscar Hammerstein II and music by Jerome Kern.

Although Ferber wrote Giant and Show Boat more than 25 years apart, they share certain themes. Both arc over several generations of American family history, told against a backdrop of ambition and desire, with relationships marred by the racism and bigotry swirling around the characters and strong women who try to make their families and the world a better place.

Show Boat was turned into the famous Broadway show quickly, but Giant took more than 50 years to get its musical version. Other than Dmitri Tiomkin's sweeping Oscar-nominated score for the movie, nobody set Giant to music till Michael John LaChiusa and Sybille Pearson went back to the novel to create a stage musical for New York's Signature Theatre. Their Giant was commissioned as part of Signature's American Musical Voices Project, with a 2009 premiere.

Since then, LaChiusa's score and Sybille Pearson's book have been reworked and refined through readings and try-outs, culminating in the show's official premiere Off-Broadway at the Public Theatre in late 2012. That production starred Broadway luminaries Brian d'Arcy James, Kate Baldwin, John Dossett, Michele Pawk and Dee Hoty, all of whom appear on the cast recording.

But the first production of this fully-realized Giant outside New York will be right here in Bloomington-Normal. That doesn't happen very often, that area audiences get first dibs on a big, bold musical straight from New York. It's quite a coup for director Scott Susong, the one who nabbed the show for Illinois Wesleyan University's School of Theatre Arts. When Susong's cast takes the stage at the Jerome Mirza Theatre in IWU's McPherson Hall next Tuesday at 8 pm, they will be musical theatre trailblazers. That's no small thing for professionals, let alone college students.

Susong writes, "Over the past fifteen years as an academic I have fanatically touted Michael John LaChiusa’s work to my students. I have been fortunate to have had the right mix of talent to actually present his work twice before at Illinois Wesleyan University, Lucky Nurse and Other Short Musical Plays (2011) and Hello Again (2011) and now to have the opportunity to tackle another LaChiusa piece is simply exhilarating."

If you saw either Lucky Nurse or Hello Again at IWU, you know that Susong and LaChiusa are a dramatically successful pairing.

Why does he keep coming back to LaChiusa?  Susong explains, "From the time that I was introduced to his work with the success of his 1994 Lincoln Center production of Hello Again I have felt that his music speaks directly to me as an artist. For me he is my generation's Stephen Sondheim. Like Mr. Sondheim, Mr. LaChiusa has made a career by defying audience and critical perceptions of what makes a musical. Where others contemporary theatre composers have a tendency to gravitate towards nostalgic recreations of popular films, Mr. LaChiusa finds inspiration in the unforgiving human condition. His work creates and inhabits worlds that would be appropriate for playwrights like Harold Pinter, Arthur Miller, Tennessee Williams or Eugene O'Neill -- but are realms that most musical theater composers and librettists would not dare enter. For me, this piece is deeply personal and has been almost therapeutic to work on with my gifted company. After a two year hiatus from the IWU stage, while directing professionally abroad and on sabbatical, the challenge of wrangling this epic tale of my native Texas has provided a wonderfully rewarding return to my academic home."

Also returning to his academic home for this production is Evan Kasprzak, the IWU student who danced to stardom on the television show So You Think You Can Dance. You may recall that Kasprzak came back to Normal to finish his degree and then leapt onto Broadway in Newsies. Now he has stepped in as choreographer for this Giant.

Giant opens November 17 at the Jerome Mirza Theatre at Illinois Wesleyan University, with performances running through the 22nd. For ticket information, call 309-556-3232 or visit the IWU School of Theatre box office page.