It's not surprising that Henrik Ibsen would center a play on a critique of politics and politicians. He was a playwright very much in tune with his times, with his harsh look at immorality and religion in Ghosts and the government cover-up at the heart of An Enemy of the People. But... Funny?

Hedda Gabler, Ghosts, A Doll's House... Not exactly a barrel of laughs. There are lighter moments in Peer Gynt in some directors' hands, but even so, Ibsen's reputation as a playwright is not built upon comedy. 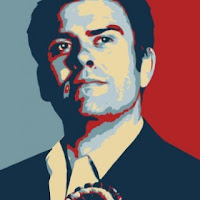 But A League of Youth, a play that came a year after Peer Gynt and ten years before A Doll's House, relies on cynical humor to tell its story. Ibsen's jabs at Norwegian politics made A League of Youth very popular in Norway, although it has only rarely been done outside that country. It did get a professional production in England that kept the Norwegian setting and added an Obamaesque poster (seen above) to underline the political nature of the action. That Nottingham theater also created an intriguing trailer for their League of Youth here.

Chicago playwright Nigel O'Hearn has taken a different tack with the material, calling it An Alliance of Brats, making the characters American and setting the play right now at an Iowa caucus during the presidential race. The spine of the play is still there, focused on an upstart who decides to launch a political campaign, pulling in young, disaffected voters to topple the corrupt fat cats. But that upstart is compromised by his own runaway ambition and lack of principles almost before he gets started. O'Hearn is banking on the fact that political naivete, demagogues and backroom deals never go out of style. Witness the current presidential campaigns...

Joey Banks, a third-year MFA acting candidate at Illinois State University, is working with O'Hearn and director Sandra Zielinski to give An Alliance of Brats a try-out of sorts, a staged reading at Heartland Theatre with a strong cast combining ISU actors and local favorites and some design elements to see how it works. There are discussions scheduled after each performance -- tonight's features the playwright himself along with McLean County Board representative Victoria Harris -- to look into the play's issues and this new adaptation more deeply.

Banks will play Ted Staynsgore (Stensgård in the original), the opportunist who kicks the alliance of brats into gear, with Todd Wineburner as Elias Bratsberg, a local aristocrat and money man; John Bowen as Monty Patronymic, a rich landowner; Bethany Hart as Audra Lundestad, the establishment politician; Kelsey Bunner and Gabrielle Munoz as Bratsberg's and Patronymic's daughters who become romantic interests for Staynsgore;  Mitch Fscher as Erik Bratsberg, shady son of the power broker; Colin Trevino-Odell as Alekson, a newspaper man; Jaimie Taylor and Tommy Kawalek as other members of the press; Andrew Piechota and Alejandro Raya as a manager and doctor who work for Bratsberg; Tim Wyman as a once-wealthy man and general troublemaker, and Riley Zobel as one of the young voters Staynsgore is reaching out to.

An Alliance of Brats has three performances left. Tonight and tomorrow the show begins at 7:30 pm, with a matinee on Sunday at 2 pm. For all the details on who's speaking after each performance, check Heartland Theatre's showtimes page. For this event, tickets are $5, payable at the door. To make a reservation, call 309-452-8709 or email boxoffice@heartlandtheatre.org
Posted by JulieK at 1:02 PM