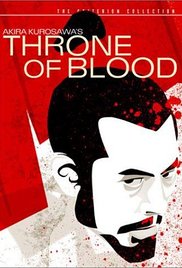 There are some very good Macbeths on film, but Akira Kurosawa's Throne of Blood from 1957 may just be the best. It's brilliant, no question, taking the Scottish lord to Japan as a general caught in a deadly spider's web of conflicted ambition and betrayal.

There is a lot to be said for the 1948 film directed by and starring Orson Welles -- his witches are really creepy even without bodies -- and the grim 1971 version directed by Roman Polanski is worth a look if you can stand the senselessness of the violence as he portrays it. I also liked a 2006 Macbeth set in contemporary Australia with Sam Worthington as Mr. M and a seriously nifty (and seriously bloody) stage Macbeth, starring Patrick Stewart, with an industrial chill that feels like Russia during World War II, captured for TV's Great Performances in 2010.

That means you can cue up the DVD player and do a Macbeth marathon with some excellent stuff included if you have a mind to. If you're content to do a mini-Macbeth-a-thon and you prefer your political intrigue, murder and mayhem on the big screen, the Normal Theater is here to give you exactly what you want. Tonight and Friday they're offering the Kurosawa samurai adaptation Macbeth, called Kumonosu-jô in Japanese or Throne of Blood in English, with Thursday, Saturday and Sunday showings of last year's international production of Macbeth, directed by Australian Justin Kurzel, starring Michael Fassbender, who is German and Irish, and Marion Cotillard, who is French, and filmed in Scotland and England.

Throne of Blood stars Kurosawa favorite Toshirô Mifune as Washizu, his Macbeth stand-in, with Isuzu Yamada as his Lady and Minoru Chiaki as Yoshiaki Miki, the Banquo of the piece. The film was shot on Mt. Fuji, purportedly to take advantage of the dark black volcanic soil that made for such stark contrast on film. There is atmosphere to burn, in everything from the mist and rain to the harsh silhouettes of samurai uniforms and towering castles, to the ghostly apparition Washizu sees spinning webs in the forest. This is a movie where sound -- or the absence of it -- and how it plays off the images in the frame are everything. The soft rustle of silk against silence or the ripple of a flock of birds leaving the trees makes as big an impact as the staccato stomp of soldiers' feet or the slash of a hundred arrows in the air. Kurosawa didn't use Shakespeare's words, but he interpreted them with sound and visual imagery that is simply stunning. 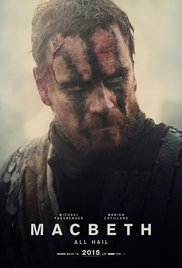 The 2015 Macbeth that airs tomorrow and over the weekend at the Normal Theater is more of a traditional Macbeth, sticking closer to Shakespeare in terms of the words, the characters and the plotline. Some of the text has been cut, as stage productions so often do, and an extra scene has been added at the beginning as a sort of prologue to give more motivation to why the Macbeths make the decisions they do later on. Kurzel has added a a film vocabulary of smoky, fiery visuals that turn his world into a rough, war-torn version of medieval Scotland. Fassbender's Macbeth seems to be pushed as much by grief and loss as by a hunger for power, and Cotillard brings an underlying softness and intelligence that helps makes her Lady M less of a monster and more compelling.

Seeing both movies is a great idea, mostly because they are so very different from each other. Steeped in different cultures and theatrical traditions, Throne of Blood and the Kurzel/Fassbender/Cotillard Macbeth make that much more of an impact seen side by side.

Click here to go to the Normal Theater website for details on showtimes and tickets.
Posted by JulieK at 4:30 PM