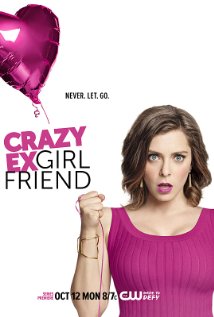 Crazy Ex-Girlfriend creator, writer and star Rachel Bloom is fresh off winning both the Golden Globe and Critics Choice Awards for Best Actress in a Comedy. Isn't it time you watched her show to see what all the fuss is about?

Before she was a Crazy Ex, Bloom was probably best known for her viral video F*ck Me, Ray Bradbury, in which she sang and danced and did some very naughty things with the Bradbury oeuvre. Bloom has kept up the Youtube thing as well as writing for shows like Robot Chicken. But Crazy Ex-Girlfriend takes her to a whole new level, along with a terrific supporting cast that includes Broadway stars (Santino Fontana, Vincent Rodriguez III, Donna Lynne Champlin) and TV vets from drama (Tovah Feldshuh) and comedy (Stephnie Weir, Cedric Yarbrough) alike.

Bloom and Crazy Ex-Girlfriend have gotten a lot of good press and, of course, those two awards (so far). But when it was still on our TVs before the holiday break, Crazy Ex pretty much languished at the bottom of the ratings. But that doesn't take the shine off how good it is or how much you really should watch it, especially if you like Broadway, musicals, fresh comedy and, well, women. It's that rare comedy that is actually directed at women, with a woman creator and star in Bloom and a lot of women behind the scenes as writers, directors and producers.

In Bloom's case, she's going for something that is "ballsy, honest and vulgar," as she tells the New York Times' Susan Dominus in a recent interview, as well as smart and a little geeky. Aside from a musical number about the horror of all the maneuvers women go through to look good ("The Sexy Getting Ready Song") and another about having a creepy girl-crush that sounds more like being a serial killer ("Feeling Kinda Naughty"), Bloom has incorporated an elegant black-and-white Fred-and-Ginger number ("Settle for Me") with Fontana and a big blow-out song about the weirdness of celebrating Christmas in hundred-degree weather ("California Christmastime") that includes both "historically low mountain snow causing staggering drought" and "eggnog fro-yo" in its lyrics. Clever, irreverent, off-balance and strange... All hiding under snazzy pop songs and bouncy dance moves.

If you want to tune in to all the Crazy Ex goodness tonight, you may want to know what's happened so far. Quickly... Rebecca Bunch, Bloom's character, is mostly smart and together when she's at her job -- she's a lawyer at a high-powered firm in New York when it all begins -- but not so much when it comes to her personal life. When she sees Josh Chan, a guy she had a quick thing with at camp when she was a teen, she decides on the spur of the moment to follow him to West Covina, California, to restart her life in the hopes of hooking Josh. That's where the crazy part comes in. Rebecca keeps telling people she didn't uproot her whole life just to pine after Josh, but we knows it isn't true. Girl is more than a little obsessed.

Ignore the whole thing about not taking a bar exam in California and instantly being able to jump into a job in a new (low-rent) West Covina law firm... Yeah, ignore that. Because Rebecca generally being a mess, contending with her own anxiety, trying to make new friends, stubbornly hanging onto the Josh thing even though he has a hot girlfriend, with all kinds of upsetting of your normal TV apple carts, is fun! It's fizzy! It's frequently scatalogical! Wheee!

Tonight, Rebecca rents a party bus to take Josh and his friends to the beach. Kenny Ortega, director and choreographer of High School Musical and choreographer of Dirty Dancing, directs this beachy episode where Rebecca appears to get down and dirty with a stripper pole on the bus. No word on whether my favorites Fontana and Champlin are in this one. I can't see either of them on that stripper pole, but you never know...

Crazy Ex-Girlfriend airs Monday nights at 7 Central on the CW.
Posted by JulieK at 1:25 PM