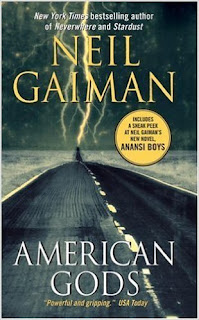 Casting news has been coming quickly for the TV adaptation of Neil Gaiman's American Gods, a 2001 fantasy novel that won both the Hugo and Nebula Awards in the Best Novel category.

This month, Gaiman released a 10th anniversary mass market paperback edition with a different cover, one that includes the additional material he added for the actual 10th anniversary back in 2011.

In 2014, Gaiman told fans that HBO was developing American Gods as a possible series, and in 2015, it was announced that the project was moving to Starz, with Gaiman himself writing some of the scripts and Bryan Fuller and Michael Green as "creators." As details have leaked, it appears that the first season, the one filming now, covers the first third of the book, leaving the rest of the book for future seasons. Some elements of Gaiman's Anansi Boys will also be incorporated into the series.

Gaiman's book uses fantasy and mythology from different parts of the world, with characters who reflect African, Celtic, Egyptian, Germanic, Hindu, Native American, Old Norse, Slavic and other mythological traditions to tell a story about modern gods mixed with ancient ones. The new gods have arisen from the American obsession with celebrity and technological "magic," while the old ones, deities and spirits who were either already part of the Americas before Columbus or came to it with the immigrants who believed in them, are fading away. An ex-con named Shadow Moon becomes the center of the war between the gods of the past and the present, with a mysterious man named Mr. Wednesday, who happens to be the corporeal form of the Norse god Odin, as his tricky, untrustworthy guide.

Casting details have been trickling out for some time, with stars like Ian McShane (Mr. Wednesday) and Gillian Anderson (Media) among those announced. The big news for alumni from Illinois State University's Department of Theatre is that Yetide Badaki, who appeared in several ISU shows and at the Illinois Shakespeare Festival when she was a student, has been cast as Bilquis, a voracious goddess of love by way of the Bible's Queen of Sheba. Bilquis and her method of, well, dispatch ("vagenda of manocide," indeed) were one of the most notorious bits in Gaiman's book.

At ISU, Badaki played Abigail Williams, the young woman who hatches the witchcraft plot in The Crucible, in a 2002 production at Westhoff Theatre that looked like it was being performed inside the bones of a giant whale, as well as Thyona, the bride who hatches the homicide plot in Charles Mee's Big Love, Natella in Brecht's The Caucasian Chalk Circle, Nurse Ratched in One Flew Over the Cuckoo's Nest and the title role in Electra.

She also played the Player Queen in Hamlet and Hymen in As You Like It at the Illinois Shakespeare Festival. In Chicago, she had roles with Steppenwolf, Victory Gardens and Writers Theatre and was nominated for a Joseph Jefferson Award for her performance in I Have Before Me a Remarkable Document Given to Me by a Young Lady From Rwanda at Victory Gardens in 2006.

American Gods is scheduled to premiere in early 2017 on the Starz network. Here's the cast as announced so far:

You'll see several of these characters, including Badaki's Bilquis, in the trailer released for Comic Con. She's the one sitting up in bed looking sultry.