Humana Festival 2017: Surviving a Wedding in I NOW PRONOUNCE 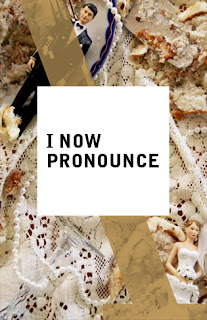 When I made my living writing romance novels, I wrote a lot of books set in and around weddings. Runaway brides, runaway grooms, bridezillas, bridesmaids hooking up with groomsmen, the bride and her identical twin sister switching places before the wedding... You name it, I wrote it. I did not, however, write anybody dropping dead at the altar.

That is the premise of Tasha Gordon-Solmon's I Now Pronounce, which was the first play I saw at this year's Humana Festival of New American Plays. At Actors Theatre of Louisville, Solmon's play starts with the rabbi who is officiating, played by the adorable Ray DeMattis, all alone in the middle of the Bingham Theatre. DeMattis has the skill and charm to hold the stage with ease, even as the rabbi he's playing goes farther and farther off track. He's so cute you don't mind that he's calling the groom something different every time he mentions him -- Aaron, Abraham, Anton -- or that he's really not well. And then disaster strikes. Before the "I do" part of the proceedings, the rabbi keels over, and we've lost him.

What happens next is the aftermath. Is the wedding cursed? Does anybody really want to get married in the wake of a dead rabbi?

The bride is holed up by herself, refusing to speak to anyone, while the groom is hanging out with two groomsmen, a cynical player who thinks marriage is a horrible idea, anyway, and a sweet but sloppy guy whose own marriage is in tatters. There are two bridesmaids, as well, trying to convince the bride to come out of hiding. One is very, very drunk and saying inappropriate things, while the other is a control freak. Neither has a date for the wedding, and that's an issue, too. We also see three tiny flower girls in matching outfits, shrieking and running around the wedding venue looking for ghosts and speculating on whether the rabbi's death means everybody else is going to drop dead, too.

By the end of the play, both bride and groom have pondered what it means to be committed to somebody else and have contemplated fleeing, insults are hurled, mortality is pondered, one couple has sex under the chuppah, and everybody pretty much gets skewered by everybody else. Most of the invective seems warranted as, all in all, they're a pretty unpleasant bunch without a whole lot of coping skills. Well, except for the flower girls. They're expected to be juvenile, after all.

Gordon-Solmon's script is especially hard on Eva, the controlling bridesmaid, as she gets ripped up and down for not being able to hang onto a man. Actress Satomi Blair makes Eva appealing enough that the attacks seem excessive, and when they're coming from Jason Veasey's slick groomsman Dave, they slide right over the line into misogyny. Against the backdrop of a wacky romantic comedy, the sexist tone doesn't play well, and the fact that both bridesmaids are desperate for a man heightens the problem.

The issues Gordon-Solmon raises are messy and complicated in a world where Say Yes to the Dress may never end, but Girls, The Mindy Project and New Girl -- all shows pitched to Millennials and centered on issues of growing up and finding or rejecting love and commitment -- are winding down*. And then there's Crazy Ex-Girlfriend, which takes the insanity of modern relationships one step farther.

*Girls just ended, The Mindy Project is finished after one more season, and New Girl is probably not coming back.
Posted by JulieK at 1:05 PM