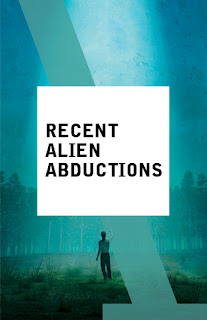 If there is one play from this year's Humana Festival of New American Plays it's hard to forget, it's Recent Alien Abductions by Jorge Ignacio Cortiñas, directed by Actors Theatre of Louisville Artistic Director Les Waters.

The thing is, Recent Alien Abductions isn't about alien abductions. Instead, Cortiñas unspools a story about family secrets, betrayal, and the violent aftereffects of American Colonialism, as a Puerto Rican man named Álvaro, played beautifully by Jon Norman Schneider, concocts a conspiracy theory around a 1994 episode of The X-Files called Little Green Men. That episode supposedly took place in Puerto Rico, even though Álvaro recognizes from the beginning that the foliage isn't remotely Puerto Rican, and the character he identifies with, a boy also named Álvaro, speaks English with a Mexican accent.

Most of us are familiar with that kind of dramatic license (or dramatic laziness), but to Álvaro, the errors bespeak something deeper. He also thinks that the episode in syndication has been changed from the one he saw the first time. And when he adds that up, he finds a message just for him, straight from The X-Files.

But the story Cortiñas is laying out doesn't stick with Álvaro or his X-Files obsession. Just as Little Green Men sent Mulder to a fake Puerto Rico, Cortiñas sends the action of his play to a fake Puerto Rican house created on the stage of the Pamela Brown Theatre, where we meet Álvaro's mother, who is in poor health physically and mentally, and his brutish brother Néstor, along with Néstor's wife and a friendly neighbor. Bobby Plasencia takes Néstor, a creep and a bully, to uncomfortable places, while Mia Katigbak is sad and affecting as his mother, Carmen H. Herlihy adds warmth as neighbor Beba, and Elia Monte-Brown does her best as Néstor's wife, whose role is somewhat underwritten.

The conflict arises with the arrival of a visitor from the United States, a woman named Patria played by Ronete Levenson with competing strands of strength and naivete. Patria knew Álvaro, who we now learn is dead, and she wants permission from his family to publish the stories he wrote -- science fiction, of course -- as a way of honoring her friend and creating a legacy for him. But there was a reason Álvaro left, a reason he never came back, and a reason he immersed himself in writing far-out stories. When the truth of his past was too hard to bear, Álvaro wrapped himself in fantasy and fiction.

Recent Alien Abductions sets its own pace, with quiet moments where you really need to pay attention, and an explosive scene of violence where you'd really like to look away. Cortiñas has built his play with significant challenges and landmines as part of its structure.

First, there's the 30+-minute monologue that opens the play, with Schneider alone on stage, framed by a ghastly green light around the proscenium. That sets a heavy burden for Schneider, since he is carrying the whole story without any technical bells or whistles to help. He is a very engaging performer and there is certainly justification for setting the character of Álvaro apart from the action. Still, that's a long time to sit with one image.

Later in the play, Cortiñas sets up an extended scene played off-stage, where we can hear the voices of actors Herlihy, Katigbak and Monte-Brown, but we can't see any of them. That, too, is well supported by the script, as unseen -- but heard -- action from the past is a critical piece of the mystery. But again, even if the reason for the scene is clear, it's somewhat difficult to follow as executed here.

There is no denying that Recent Alien Abductions is a tricky script from beginning to end. And yet... And yet, it is compelling, intense and haunting in the end.
Posted by JulieK at 1:09 PM