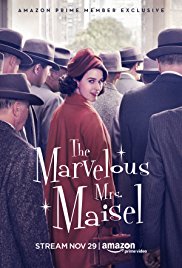 The sprightly Amazon comedy known as The Marvelous Mrs. Maisel is having a very happy new year. It's already been named the best comedy series on TV by Golden Globes and Critics Choice voters, with Rachel Brosnahan, who really is marvelous as Mrs. Maisel, nabbing Best Actress awards from both groups. To celebrate all that awards success, Amazon is now making The Marvelous Mrs. Maisel available to everyone (not just Amazon Prime subscribers, in other words) this weekend, so that everyone can share the joy. You can stream it for free starting at 12:01 am today and ending at 11:59 pm Monday January 15.

All eight episodes of The Marvelous Mrs. Maisel bowed on Amazon last November. I admit: I binged the minute they were available. The series looks great -- no surprise costume designer Donna Zakowska is nominated for awards of her own --  and it has enough humor and heart to really sell its story.

What story? When we first meet Miriam "Midge" Maisel, she's enjoying her life as a housewife on the Upper West Side in the late 1950s. Nice Jewish husband, two babies, lovely apartment in the same building as her parents... Midge Maisel has it all under control. She can hire Broadway dancers and give the perfect speech to make her wedding zing, she can make the perfect brisket to get her wannabe standup comedian husband a slot in a club (he has a cushy day job but longs to don a turtleneck and do standup in Greenwich Village) and she can perform the perfect calisthenics necessary to keep her perfect figure. Unfortunately, her husband shows pretty quickly he isn't really up to all that perfection. He's gone, her parents are having a meltdown, and her whole identity is on the line. And, at that moment, with her well-ordered life tipped upside-down, Midge discovers her talents may be very different from what she expected. After a couple of meetings with Lenny Bruce (winningly played by Luke Kirby of Slings and Arrows fame) and some help from a scruffy comedy manager (very funny Alex Borstein), Mrs. Maisel is on her way.

The Marvelous Mrs. Maisel has all the rapid-fire, breezy dialogue you'd expect from an Amy Sherman-Palladino project. Rachel Brosnahan doesn't exactly offer a Jewish 1958 version of Lorelai Gilmore, but she's close. Her Midge is also funny, smart, complicated and beautiful. And again, that wardrobe!

I am not all that into standup comedy as a milieu, but it doesn't really matter. It's Midge and how she steamrolls her life that makes it magic. Brosnahan carries the show beautifully, with all kinds of help from a terrific supporting cast. Borstein and Kirby are part of that, with Marin Hinkle and Tony Shalhoub making a huge contribution -- they're crazy and infuriating, but fiercely funny -- as Midge's neurotic parents, with guest actors like Nate Cordrry, Joe Grifasi, Jane Lynch, David Paymer, Kevin Pollak, Wallace Shawn and Mary Testa making vivid impressions along the way. And then there's Michael Zegen, given the unenviable task of bringing to life limp noodle Joel Maisel, Midge's husband. He is successful at making Joel a weasel, but it seems like a no-brainer that she's better off without him.

It remains to be seen in Season Two just how independent Mrs. Maisel will become with her newfound standup confidence and whether Mr. Maisel will appear as anything more than a distant memory. Given that she's still got his name and his kids, I have to think Joel will be sticking around in some capacity. But there's plenty of conflict left to explore with her parents and how they'll react to the new downtown Midge, how she manages being a mother while she's on stage, where she lives and how she keeps brisket on the table, and where, if anywhere, Midge looks for romance. Who needs Joel?

You'll find The Marvelous Mrs. Maisel streaming this weekend at Amazon.com.
Posted by JulieK at 1:27 PM