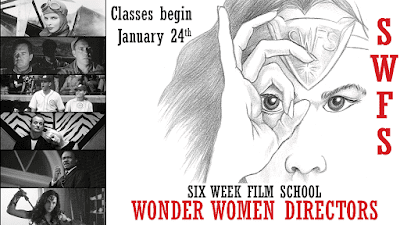 Professor William McBride will be starting a new six-week film school at the Normal Theater tomorrow night. You may recall previous offerings centered on film noir, Hitchcock and Martin Scorsese. This time, McBride will be looking at films directed by women, starting with Dorothy Arzner’s Christopher Strong (1933), starring Katharine Hepburn as an independent-minded aviator, January 24 at 7 pm, and in subsequent weeks moving on to Ida Lupino’s thriller The Hitch-Hiker (1953); A League of Their Own (1992), Penny Marshall’s love letter to professional women’s baseball during World War II; Sofia Coppola’s Lost in Translation (2003), a highly cinematic look at two lost souls navigating the modern world; Selma (2014), Ava DuVernay’s take on Martin Luther King Jr. and the struggle for voting rights; and the superhero phenomenon Wonder Woman (2017), directed by Patty Jenkins.

That's quite a range of styles and themes, but Professor McBride is clear on why he chose them:


"On my way out of the Normal Theater following the post-screen discussion of one of Scorsese’s films, a female patron approached me and asked why not do a series of female directors? I have been working on our new series ever since—and given the current cultural moment regarding harassment and gender inequality in Hollywood, Washington, and everywhere else, the timing of Wonder Women Directors seems perfect. Joining me for individual screenings will be Shari Zeck, Interim Dean, Milner Library, Illinois State University; Li Zeng, Head of Theatre and Film Studies and Film Minor, Illinois State University; Chamere Poole, Dept. of English Ph.D. candidate, Illinois State University; and Ann Johnson, Dept. of Sociology Masters student, Illinois State University, who will discuss the overarching cultural concepts of sex, power, history, and film style in these six films directed by women."

Although it's called a film school, there are no tests and no assignments. McBride will be there to introduce each movie and lead the post-show discussion, and he also offers hand-outs and extra material to supplement your viewing, but anyone is free to attend the films for free at the Normal Theater, Tuesday nights at 7 pm from January 24 to March 7, with a week off for Valentine's Day.

This time out, McBride and the Normal Theater are asking you to RSVP or reserve a seat, with a link to do just that on the program's page at the Normal Theater website. You'll find details on each film there, and that's also where the extra materials will go once they're up.

Christopher Strong alone has generated pages and pages of commentary on what it says about gender, feminism, professional women, culture, romance, and what a girl had to do to get by in the 1930s, as well as its sensational costume design, so I know you'll enjoy hearing what McBride and his experts have to say on that one!
Posted by JulieK at 8:21 PM