Auditions Coming Up for SHREK and MY FAIR LADY

If you are of a musical bent, there are two sets of auditions coming up that may be calling (or singing) your name.

First up will be Community Players' auditions for Shrek the Musical on May 18, 19 and 20, from 6 to 9 pm each night. Shrek the Musical is the live, more musically inclined version of the first Shrek animated movie, telling the story of a sweet green ogre and the princess he falls in love with. In both versions, the ogre has a talking donkey sidekick, short enemies in high places, and a whole bunch of fractured fairytale folk to fill out his story. On Broadway, he also got a bunch of songs, with music by Jeanine Tesori and lyrics from playwright David Lindsay-Abaire, who also wrote the book. Songs include "Big Bright Beautiful World" and "Morning Person," as well as "I'm a Believer," borrowed from the movie.

Just as a bit of comparison, you will remember that Mike Myers, Cameron Diaz and Eddie Murphy were the voices of Shrek, Princess Fiona and Donkey for the film, while John Lithgow voiced evil Lord Farquaad. Brian d'Arcy James, Sutton Foster, Daniel Breaker and Christopher Sieber took those roles on Broadway, with the help of extensive costuming to make them look like their animated alter egos. Plus Sieber had to walk on his knees to get teeny tiny Lord Farquaad up and running. Everybody from that group except Breaker picked up a Tony nomination, but costume designer Tim Hatley was the lone winner.

Community Players will be looking for adult and child performers for its Shrek, with auditions for kids in grades 3 to 8 scheduled for 6 pm and auditions for adults (considered anything older than 9th grade) scheduled for 7 pm. The younger set will be asked to sing 16 bars and show off their dance skills, while adult auditions will consist of singing, dancing and reading from the script. For more information on Shrek the Musical auditions, click here or here. 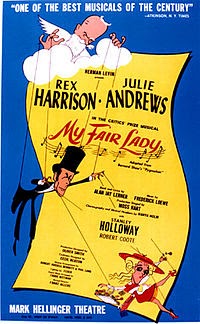 At pretty much the opposite side of the musical spectrum, Prairie Fire Theatre will hold auditions for My Fair Lady, based on the George Bernard Shaw play Pygmalion, on May 28 and 29.

My Fair Lady is a Lerner and Loewe classic, featuring megahits like "I Could Have Danced All Night," "On the Street Where You Live," "With a Little Bit of Luck," and "I've Grown Accustomed to Her Face" as it tells the story of a lowly Covent Garden flower girl turned into a lady by an arrogant language expert. It ran for an astonishing 2717 performances on Broadway from 1956 to 1962 and picked up six Tony Awards, including Best Musical, Best Actor for Rex Harrison, Best Director for Moss Hart and Best Costume Designer for Cecil Beaton.

Oddly, neither Julie Andrews nor Stanley Holloway won for their standout performances as Cockney urchin Eliza Doolittle and her dad Alfred.

Harrison and Holloway were there when the movie was made in 1964, but Audrey Hepburn (dubbed by Marni Nixon) took over for Julie Andrews. The movie My Fair Lady walked off with eight Oscars, including Best Picture. Harrison was once again a winner, along with costume designer Cecil Beaton, but Hepburn and (once again) Holloway had to be happy to be nominated. When he won Best Actor, Rex Harrison dedicated the award to both Julie Andrews and Audrey Hepburn, his two "fair ladies."

Rhys Lovell, who took the reins of A Little Night Music for Prairie Fire last year, will direct My Fair Lady this time out. Lovell is looking for ten women and twelve men of all ages to play everything from Eliza and her dad to Henry Higgins' compatriot Colonel Pickering, Henry's long-suffering mother, and a variety of buskers, footmen and society folk who populate both the low and high worlds where Eliza finds herself.

The role of Henry Higgins has been precast -- Joe Penrod will play that single-minded task master -- but everything else is open. Auditioners are asked to prepare a short musical selection from any show they like. An accompanist will be provided.

Auditions will be held in Room 308 of Illinois Wesleyan's Presser Hall on Tuesday, May 27, and Wednesday, May 28, from 6 to 8 pm each night. Note that performances of Prairie Fire's My Fair Lady are scheduled to take place from July 31 to August 3 in IWU's Westbrook Auditiorium.
Posted by JulieK at 1:26 PM