THE ODD COUPLE Is Back and Community Players Has 'Em

Quick! Who was the first Odd Couple on Broadway?

Neil Simon's play about two mismatched roommates hit the Great White Way in 1965, in a production directed by Mike Nichols that stuck around for 964 performances. It won Neil Simon his first Tony Award (as "Best Author," a category that doesn't exist anymore) and took home trophies for Nichols, scenic designer Oliver Smith, and lead actor Walter Matthau, who played messy Oscar Madison. The neat half of the apartment was played by Art Carney, famous from The Honeymooners. 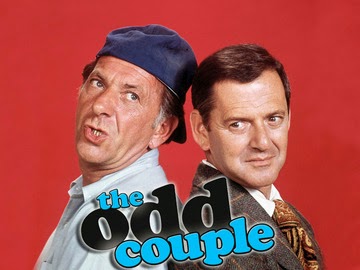 And after that... The Odd Couple spawned a 1968 movie with Matthau and Jack Lemmon, a 1998 movie called The Odd Couple II, also starring Matthau and Lemmon, a long-running TV series with Jack Klugman and Tony Randall (seen at right), and two more trips to Broadway, with Rita Moreno and Sally Struthers in a female version of the play in 1985 and Nathan Lane and Matthew Broderick in an updated Odd Couple in 2005.

The show is a natural for community theaters, since it's funny, the situation (divorced men who are not exactly a good fit are forced to share an apartment) doesn't go out of style, and it uses one set and a cast of eight. Community Players did The Odd Couple in 1968, 1990 and 2001 (with female leads) and they're bringing it back for 2014. This time, Jeremy Stiller has directed and designed the set, with Brian Artman and Tom Smith as Oscar the Slob and Felix the Neatnik, respectively. Also in the cast: Andy Cary, Drew German, Allen Popowski and Thom Rakestraw, with Stacy Baker and Bridgette Richard as the Pigeon Sisters from upstairs.

The Odd Couple opens this Thursday, the 15th, with a pay-what-you-can preview, followed by performances from May 16 to 25. Tickets (for every night except that first preview) range from $7 to $15. They appear to be selling fairly briskly, but good seats are still available as I write this.

Check out the event's Facebook page for all the details.
Posted by JulieK at 1:20 PM