A Playwright and a Movie Star in Normal: BY THE WAY, MEET VERA STARK at ISU 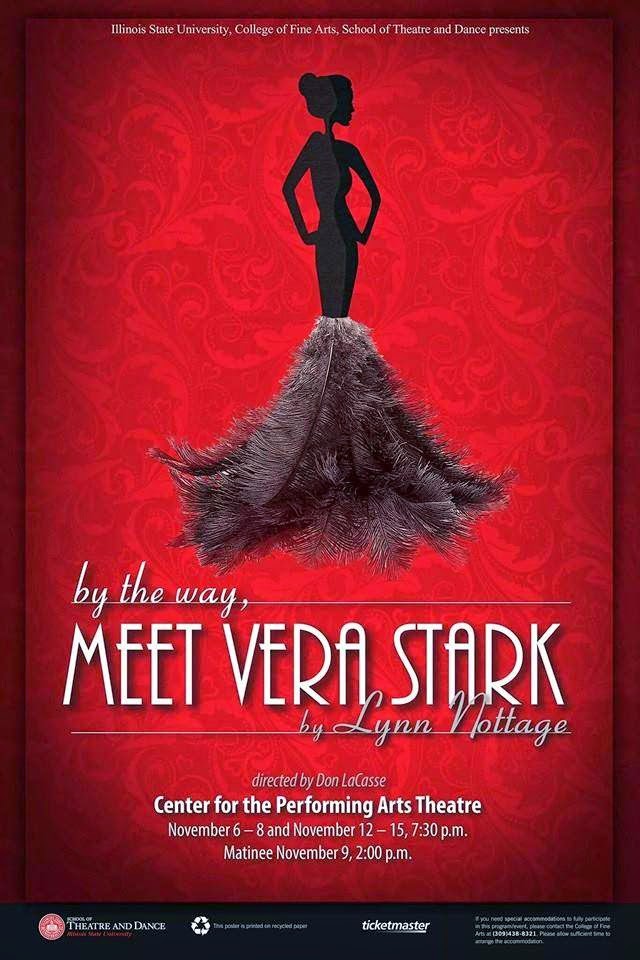 In case you're keeping track, Ruhl was a finalist for the Pulitzer Prize for Drama for The Clean House in 2005 and again for In the Next Room in 2010, and Hudes was a Pulitzer finalist for Elliot, a Soldier's Fugue in 2007 and for the the book she co-wrote with Lin-Manuel Miranda for the musical In the Heights in 2009, picking up the win for Water by the Spoonful in 2012. Nottage edged out Hudes in 2009, taking home the coveted Pulitzer for Ruined. Ruhl and Nottage have also been awarded MacArthur Fellowships (sometimes called Genius Grants), Ruhl owns a Susan Smith Blackburn Prize, and Nottage took home a Guggenheim Fellowship. What's interesting about the pile of hardware is not that it was accumulated by female playwrights, but that the body of work it represents is so eclectic, combining comedy and drama with issues of war, family, gender, sexuality, love, career and ambition.

By the Way, Meet Vera Stark is satirical, amusing piece, looking into the mysterious history of a black actress in Old Hollywood. While she dreams of breaking into the movies in the early 30s, Vera is employed as a ladies' maid by a neurotic diva named Gloria Mitchell who has the reputation of being "America's Little Sweetie Pie." When a role (as a slave) is available in a melodrama where Gloria is playing a quintessential Southern belle, Vera jumps at the chance to get on screen. Yes, it's a slave. But it's a slave with lines. And even in a small role, Vera stands out. In fact, she is incandescent and unforgettable on screen, whether or not she is limited to the maids and mammy roles available to someone like her.

Vera achieves a certain level of stardom, but her story isn't happily-ever-after. By the 70s, she has disappeared from the screen, leaving a panel of scholars in Meet Vera Stark's second act to debate what happened to her and what kind of footnote to movie history she represents.

Don LaCasse directs Vera Stark for ISU, with MFA actress Faith Servant as Vera, Mary DeWitt as Gloria Mitchell, Brianna Haskell and Gabrielle Lott-Rogers as Vera's wannabe actress friends, Dan Machalinski and Wesley Tilford as major players in the film industry, and La'Mar Hawkins as a romantic interest. When the action jumps forward, Haskell, Hawkins, Lott-Rogers, Machalinski and Tilford play the academics and TV talking heads putting together the pieces that make up the real and the imagined Vera Stark.

Playwright Lynn Nottage is coming to Illinois State University as part of this Vera Stark experience. Nottage will speak to students and audience members after the November 8 evening performance and before the Sunday matinee on the 9th. Click here to see the details of Nottage's visit.