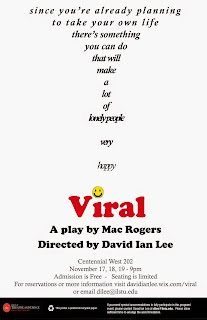 Before he leaves Illinois State University, third-year MFA director David Ian Lee is taking on one last show. It's not just any show, either. Instead, Lee is directing a provocative piece from Mac Rogers, a play called Viral that deals with the right to die mixed together with the Youtube generation and a search for sexual satisfaction that comes from unorthodox places. Or, as the show's Facebook page describes it:

"Mac Rogers' Viral is a frank, humane and surprisingly funny look at some very complex issues -- assisted suicide, fetish, dignity and privacy in the age of viral videos, where there’s nothing so twisted that it doesn’t have an audience."

Lee is directing a cast that includes his wife, Karen Sternberg, as Meredith, a woman interested in ending her life for reasons she doesn't care to share. Garrett Douglas, Alex Levy and Katharine Rohrscheib are a trio of misfits eager to witness the moment Meredith shuffles off this mortal coil. And Pete Guither, Assistant Dean in ISU's School of Theatre and Dance, will play Snow, a mysterious "big daddy in the specialized entertainment field."

Plotwise, it's a collision of someone who wants to die, a small group of someones who want to videotape the perfect moment of death, and someone else who has experience with the medium.

David Ian Lee has made video (appropriate, yes?) interviews with his cast available on the Facebook page and lots more info on the show's website, where Lee promises "daily videos, music, essays, interviews, and other content to extend the theatrical experience." One piece of news: Playwright Mac Rogers will participate in a talkback via Skype following the Monday, November 17th performance of Viral. Again, technology and this play are a natural match!

If this edgy little play sounds like your cup of snuff, performances are scheduled for November 17, 18 and 19 at 9 p.m. in Centennial West 202 on the Illinois State University campus. To make reservations, leave a comment on the Viral Facebook page or visit davidianlee.wix.com/viral