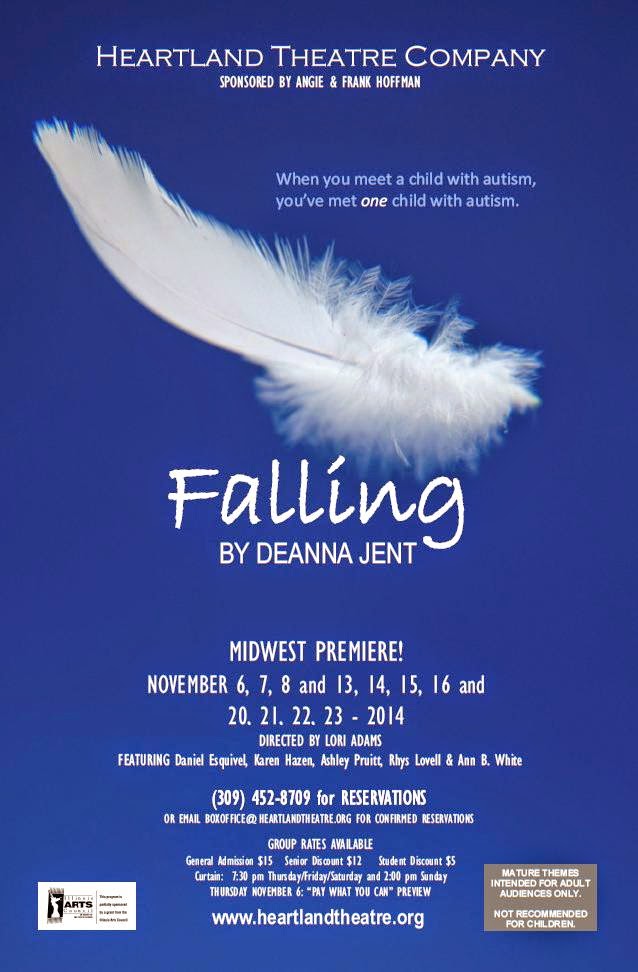 When Heartland Theatre opens Falling, Deanna Jent's play about the challenges of living inside a family with a profoundly autistic son, it will represent Step 3 in the journey director Lori Adams has taken with this play. Adams directed the show's world premiere at the Mustard Seed Theatre in St. Louis as well as its Off-Broadway production at the Minetta Lane Theatre. And her husband, scenic designer John C. Stark, designed both productions, along with a return stand at the Mustard Seed.

What made Falling rise above all the other new plays that pop up regionally, enough to send it straight to New York? The fact that it is in part based on Jent's real life as the mother of an autistic son certainly makes it stand out. And the rising profile of autism, along with larger and larger numbers of children diagnosed somewhere on the spectrum, makes it timely and compelling.

Adams and Stark are once again on board for Heartland's take on the family drama, bringing everything they learned about Jent's script back home for the benefit of local audiences who may not have been able to get to New York or St. Louis to see it there.

For this production, Karen Hazen and Rhys Lovell, who appeared together at Heartland in Middletown in 2013, will appear as Tami and Bill Martin, the couple whose marriage is tested by the demands of their older child. Daniel Esquivel, an ISU student in the School of Theatre and Dance, will play Josh, the child in question, while fellow Redbird Ashley Pruitt will play his younger sister Lisa. The family's fragile balance begins to falter when Grammy Sue, played by Ann B. White, arrives for a visit.

Playwright Deanna Jent will add to the Falling experience with a visit to Bloomington-Normal for what Illinois Wesleyan University is calling an "IWU Weekend with Deanna Jent" over November 15, 16 and 17, including events at Wesleyan as well as Heartland Theatre. Jent will stick around after Heartland's performances on the 15th and 16th to answer questions and give the inside scoop on Falling. These after-show discussions will be free and open to the public. To cap off her weekend in B-N, Jent will be present for a reading of her brand-new play Bloodlines at Heartland at 7:30 pm on Sunday the 16th.

In addition to Jent's appearances for post-show discussions, Heartland has arranged "post-scripts" involving various issues raised in the play, from daily life and employment opportunities for people with autism to bridging the gap between theater and disability. Lori Adams, John Stark and the cast of Falling will also be available after certain performances to give their perspective on the process. For the complete list of discussions scheduled, check Heartland's Show Times page here.

Falling opens tomorrow night at Heartland Theatre with a special Pay What You Can preview performance, followed by ten performances from November 7 to the 23rd. To see the complete schedule of performances, click here. For reservation information, click here.
Posted by JulieK at 3:16 PM