Neil Simon owns more Tony and Oscar nominations than any other writer, at least according to PBS and their American Masters documentary about him. They also say that he's the only writer ever to have four simultaneous Broadway productions. The New Yorker, meanwhile, says that "since 1970 almost no day has gone by without a professional production of a Neil Simon comedy playing somewhere in the country."

According to my count, he has 14 Tony nominations plus three wins, four Oscar nominations, and four Emmy nominations dating from 1957 to 2001. Oh, and he has a Pulitzer Prize for Drama for Lost in Yonkers.

If you're curious about what four plays were running at the same time, a quick check of his Internet Broadway Database credits show Barefoot in the Park, The Odd Couple, Sweet Charity (for which Simon wrote the book), and Star-Spangled Girl all playing from December of 1966 to June of 1967. That's what you might call running the Broadway table.

Right now, you have two opportunities to see Simon's work in person, with Brighton Beach Memoirs, the semi-autobiographical piece about a teen boy in Brooklyn in the late 1930s, at Illinois State University's Center for the Performing Arts through the 27th, and The Odd Couple, the perennial favorite about mismatched roommates that's spawned two movies and two TV series, at Illinois Central College in East Peoria this weekend and next. 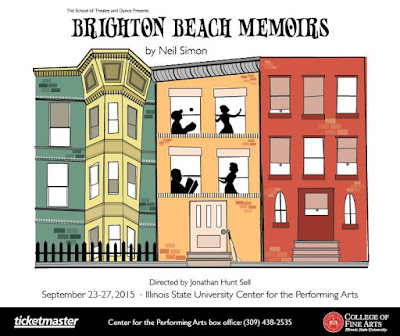 Third-year MFA director Jonathan Hunt-Sell is at the reins of Brighton Beach Memoirs, one of Simon's most successful plays both artistically and financially. The play's original production spent three years on Broadway and earned Tony Awards for director Gene Saks and actor Matthew Broderick, who played Eugene Jerome, the stand-in for Simon. For ISU, Garrett Douglas takes the role of Eugene, with Jimmy Keating as his brother Stanley, Gloria Petrelli and Graham Gusloff as his parents, Christina Duris as Aunt Blanche, and Cassandra Conklin and Megan Tennis as his two teenage cousins, whose presence causes Eugene even more tsuris in the crowded Jerome household.

Tickets are available at the College of Fine Arts box office at 309-438-2535 or through Ticketmaster. Four performances remain, with tonight's curtain at 7:30 pm, 2 pm and 7:30 pm performances tomorrow, and another matinee on Sunday at 2 pm. Tickets are also available through ticketmaster.com. 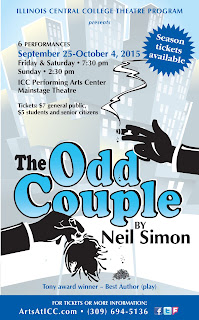 Over in East Peoria, ICC presents The Odd Couple starting tonight at 7:30 pm. The original production of The Odd Couple ran for 964 performances from 1965 to 67, winning four Tonys, including awards for Best Actor Walter Matthau, Best Director Mike Nichols, Best Scenic Designer Oliver Smith, and a Best Author Tony for Neil Simon himself.

For ICC, Robin Berkley directs, with scenic design by Rob Fulton, who most recently did the spectacular set you see at Heartland Theatre for the play Tribes. Berkley's cast includes Chris McHenry as Felix, the fussy neat freak roommate, and Alek President as Oscar, the messy one.

Email ThisBlogThis!Share to TwitterShare to FacebookShare to Pinterest
Labels: Arts at ICC, ISU School of Theatre and Dance, Neil Simon