Let's Catch Up with September

Yes, it's late, but it's the day after a holiday weekend, which is the perfect time to take store of what's coming up. September! Back in school, theatre scene set to simmer, everybody looking for entertainment... 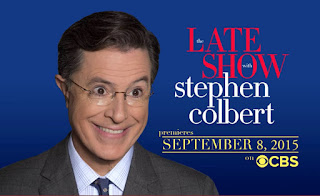 There's plenty of drama happening out there! Serena and Venus Williams are battling in a quarterfinal at the US Open even as we speak, and that's about as dramatic as it gets. And later tonight, Stephen Colbert hits the desk for his very first Late Show from the Ed Sullivan Theatre in Manhattan. If his Comedy Central show was any indication, it will take Colbert a night or two to really get rolling. But once he's got his Late Show legs under him, watch out! Tonight Stephen hosts George Clooney and Jeb Bush, with Jon Batiste leading the band. You can find Mr. Colbert et al. on CBS after the nightly news.

Community Players opened the Michael Frayn backstage farce Noises Off last weekend, but they'll be back this weekend, too. Darlene Lloyd stars as Dotty Otley, an English actress a bit past her prime, taking her act on the road with a bad farce and a terrible company of actors. The hapless troupe includes Dotty's much-younger boyfriend, Garry Lejeune, played for Community Players by Thom Rakestraw, and much-beleaguered director Lloyd Dallas, played by Brian Artman, who himself directed Noises Off at Players a few years ago. There's also an aging dipsomaniac (played by Alan Wilson), a gossip (Bridgette Richard), two dim bulbs (Hannah Kerns and Chris Terven), a sleep-deprived stage hand (Jon Hubal) and a stage manager (Erica Sommers) who really does have it all together, except everybody else keeps getting in her way. Suffice it to say several people end up in their underwear at one time or another and there are a whole lot of slammed doors, sardines and stairs to run up and down. Noises Off continues at Community Players through the 13th. Click here for ticket information.

Nina Raine's Tribes, an Olivier nominee for Best Play in its inaugural production in London in 2010, begins at Heartland Theatre on Thursday the 10th with a Pay What You Can Preview, running till September 27. Tribes is a family drama, circling around Billy, born deaf into an intensely verbal clan. He can read lips but he has never learned sign language. That's just fine by his family, even if he tunes them out on occasion. But then Billy meets Sylvia, a hearing young woman from a deaf family. Sylvia is very good at sign language. She understands Billy's "tribe" much better than he does at the onset of the play. Tribes is a provocative play with strong language and a lot to say. Sandra Zielinski directs a cast that includes Colin Lawrence as Billy, Tim Wyman and Cristen Monson as his parents, Connie Chojnacki Blick and Aaron Sparks as his sister and brother, and Kaitlyn Wehr as Sylvia, the catalyst for change. Showtimes are listed on this page, with reservation info at the bottom. 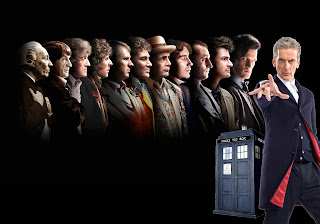 In television news, Dancing with the Stars returns to ABC on the 14th, with Doctor Who (seen above) coming back to BBC America on the 19th; Gotham (Fox), The Voice (NBC), The Big Bang Theory (CBS) and Castle (ABC), all on the 21st; soapy goodness Empire (Fox) and Nashville (ABC) on the 23rd; and Shonda Rhimes' Scandal and How to Get Away with Murder both back on ABC on the 24th. There's new stuff popping up, too, from Scream Queens on Fox on September 22 to ABC's much ballyhooed Blood and Oil and Quantico on September 27.

Here's something you don't see every day... A one-man Wild Bill Hickok show. Walt Willey, who starred as one of Erica Kane's most lasting romantic foils on the daytime soap All My Children, comes to the BCPA in Wild Bill! It's billed as "an evening with James Butler Hickok starring Walt Willey," although it's actually an afternoon in this case. Bloomington's stop on the Wild Bill! tour is at 2 pm on September 20th. If you're wondering what this exploration of the life and times of Western legend looks like, you can catch a teaser video on Youtube. 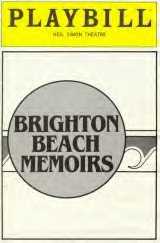 The fall theatre season at Illinois State University starts on September 23 with Neil Simon's Brighton Beach Memoirs, directed by Jonathan Hunt Sell in the Center for the Performing Arts. Brighton Beach is the first of Simon's autobiographical trio of plays, with the fictional character of Eugene standing in for Mr. Simon in all three. In this one, Eugene is a teenager in Brooklyn during the Depression, obsessed with baseball and girls and trying to survive in his crowded household. Garrett Douglas will play Eugene for ISU, with Jimmy Keating as his brother Stanley, Gloria Petrelli and Graham Gusloff as his parents, Christina Duris as Aunt Blanche, and Cassandra Conklin and Megan Tennis as cousins Laurie and Nora, who move in and cause Eugene no end of tsuris. 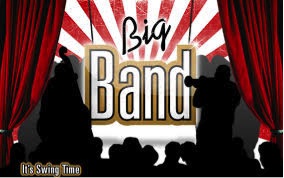 Prairie Fire Theatre offers A Night of Big Band Music on September 25 and 26. The two Nights will take place at Illinois Wesleyan's Memorial Center on 7:30 pm each night. According to the Prairie Fire site, tickets aren't on sale yet, but will be soon.

And, to bring this full circle, another late night host steps into the box on September 28 when Trevor Noah officially takes on The Daily Show on Comedy Central in the wake of Jon Stewart's departure earlier this summer. He won't be Jon Stewart, but I guess we'll have to see if he can make it work.
Posted by JulieK at 8:15 PM