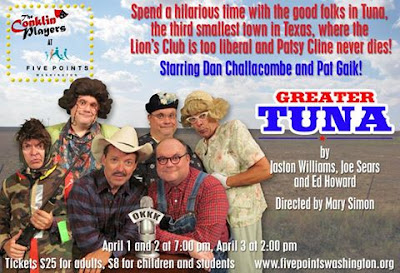 Conklin's Barn may be a thing of the past, but its players have found a new space to play. Greater Tuna, the two-person show about the off-beat residents of a tiny town in Texas, will be on stage at Five Points Washington on April 1, 2 and 3, with Conklin Players Dan Challacombe and Pat Gaik playing everybody in Tuna, Texas, directed by Mary Simon, long-time owner and operator of the Barn II.

"Everybody in Tuna" includes Aunt Pearl, who has a penchant for poison pills (in the middle of the back row in the picture above), Vera Carp, who leads the local Smut Snatchers group (the blonde next to Pearl), put-upon bouffant-wearer Bertha Bumiller (back row, far left), and gun-shop owner Didi Snavely. Didi is the one in camo, with the gun, of course. In front with the DKKK microphone are radio hosts Thurston Wheelis and Arles Struvie. By my count (if you include Yippy the dog) there are 22 characters in Greater Tuna. The key is that two people play them all, rapidly changing wigs, costumes and props.

Greater Tuna was created by Texans Jaston Williams, Joe Sears and Ed Howard, with Williams and Sears originally taking all the roles and Howard directing. The show was a huge success, playing everywhere from Texas to off-Broadway and the White House. It is affectionate and biting, sending up small-town prejudices and provincialism as it makes us care about a pretty awful set of people. My favorite may be juvenile delinquent Stanley Bumiller, but it's hard to beat Aunt Pearl when she feels a song coming on over the coffin of a dead lover.

For tickets to this Greater Tuna, visit the Five Points page. Three performances only, y'all.
Posted by JulieK at 1:00 PM