IN THE BLOOD Opens Tonight at U of I 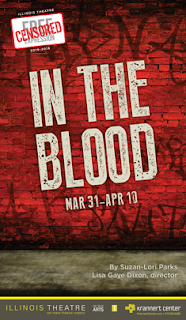 Did you read The Scarlet Letter in school? In my memory, my junior high English class wasn't all that thrilled about the assignment, but we slogged our way through, thinking ourselves so much more enlightened than the characters in the book who made poor Hester Prynne wear a scarlet A. Playwright Suzan-Lori Parks found something of contemporary significance in Hawthorne's story about illicit love between a hypocritical Puritan minister and the woman who had his baby out-of-wedlock in 17th century Massachusetts, enough to write a modern adaptation in play form. Parks' play In the Blood, based on A Scarlet Letter, was a finalist for the 2000 Pulitzer Prize for Drama.

The main character in the play is also named Hester, but Parks' modern-day Hester has five illegitimate children by five different fathers, instead of just one, although one is a minister called Reverend D, not unlike Reverend Dimmesdale in the book. Hester and her kids are living in abject poverty, but she has no way of making it better. Used and abused by the system and the very people who should be helping her, Hester is trapped by her own past and the harsh judgments made about her. She's just an irresponsible slut, right? Not so different from Hester Prynne, blamed all by herself for the baby it took two to create.

Lisa Gaye Dixon directs In the Blood for the University of Illinois's Illinois Theatre series, part of a season devoted to works that explore free expression and censorship. The Scarlet Letter has been banned regularly, making In the Blood a perfect part of the dialogue on free expression

Dixon's production of the play opens tonight in the Studio Theatre, a small black box theater inside Krannert Center for the Performing Arts on the U of I campus, with performances continuing through April 10. Click here to see the performance schedule and here for ticket information.
Posted by JulieK at 7:35 PM

Email ThisBlogThis!Share to TwitterShare to FacebookShare to Pinterest
Labels: In the Blood, Krannert Center for the Performing Arts, Suzan-Lori Parks, The Scarlet Letter, University of Illinois Theatre