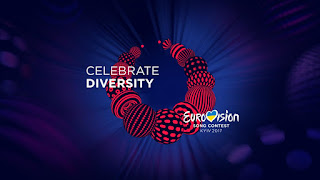 Another year of Eurovision, the international song contest that has been around since 1956, is now in the books.

Every year, an array of countries who fall within the "European Broadcasting Union" pick original songs and artists to represent them in Eurovision competition. In the 1950s, the field was limited to a dozen nations in Western Europe, but by now, the number is up to 46, including Eastern Europe, Eurasia and even Australia. It's generally a fizzy-pop extravaganza, with over-the-top performances punctuated by columns of fire, smoke, lasers, video projections, wind machines, wacky dance moves, eye-searing costumes, even shiny robots in strange headgear, an adorable group of grannies and a kinda/sorta vampire.

Ukraine was the host this time out since they won last year and they chose Kiev as the site. The theme was "Celebrate Diversity," even though the hosts were three white guys, which created some controversy.

With a new (and apparently more complicated) scoring system in place, Portugal took the crown for the first time ever, with Salvador Sobral singing a sweet love song called "Amar pelos dois" or "Loving For The Both of Us." It's a melancholy, haunting ballad in the Portuguese Fado style, sung simply and softly, with no major frills in terms of explosions or milkmaids or disco balls. Not a driving dance beat to be found! And it's in Portuguese, which is unusual, since most of the songs entered are in English.

Bulgaria and Kristian Kostov's "Beautiful Mess" came in second, with Moldova, Belgium, Sweden, Italy, Romania, Hungary, Australia and Norway finishing out the Top Ten. There were plenty of unique (some might even say bizarre) choices, like Romania's yodel/rap/pop entry, "Yodel It!" by Ilinica featuring Alex Florea and Moldova's "Hey Mamma" performed by the Sunstroke Project featuring an "Epic Sax Guy" named Sergey Stepanov, just to keep you in a more typical Eurovision frame of mind.

Next year... Lisbon! In the meantime, it would be lovely if Sobral (and his sister, who wrote the song) get some international attention.