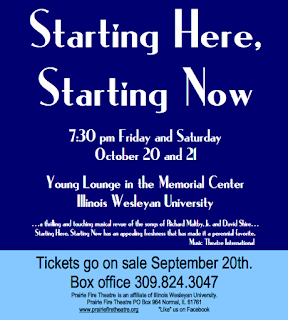 What will Prairie Fire Theatre be doing in October? How about a revue that navigates "the maze of modern relationships with its heart firmly on its sleeve"*? That revue is Maltby & Shire's energetic, emotional Starting Here, Starting Now, a collection of theater "story" songs from shows they'd written that didn't make it as well as extra pieces they felt fit this new concept.

You may know Richard Maltby Jr. and David Shire as a team from shows like Baby, Big and Closer Than Ever, or individually, where each has enjoyed success in different forums. Maltby has piled up Tony nominations for other scores (Miss Saigon, Nick & Nora) as well as for directing Broadway shows (Fosse, Song and Dance) and he won a Tony Award for his direction of Ain't Misbehaving. Shire has written the scores for movies like The Conversation, All the President's Men and Zodiac, contributed Grammy-nominated music to the score of Saturday Night Fever, composed for TV shows like Alice and Shining Time Station, and he won an Oscar for the song "It Goes Like It Goes" from Norma Rae. A single he wrote -- "With You I'm Born Again" -- was a major hit for Billy Preston and Syreeta in 1979. Shire also served as Barbra Streisand's accompanist, conductor and arranger during her Color Me Barbra years, and Streisand has recorded five of his songs, including "Starting Here, Starting Now" and "Autumn" from this Maltby/Shire revue.

Streisand is a hard act to follow, but director Cyndee Brown has assembled a fantastic cast for Prairie Fire's October production of Starting Here, Starting Now, with Cristen Monson, Joe Penrod and Jennifer Rusk set to sing the lights out on songs like "Crossword Puzzle," "I Don't Remember Christmas" and "Watching the Big Parade Go By."

Starting Here, Starting Now will be presented October 20 and 21 in the Young Lounge in Illinois Wesleyan University's Memorial Center, with 7:30 pm performances both nights. Tickets will be available on September 20 at the Prairie Fire Box Office at 309-824-3047.

*This description of Starting Here, Starting Now is used quite frequently, and my best guess is that it originated with Music Theatre International, but I wasn't sure enough to attribute it there. Good description, though!
Posted by JulieK at 1:23 PM