The Station Theatre Serves Up Silence, Science and Lauren Gunderson for 17-18

The Station Theatre is usually the last to announce its fall season. Artistic Director Rick Orr is wont to make the big announcement at the company party that marks the end of summer, meaning fall shows are just around the corner when he spills their details.

Last year, the Station made the unusual choice (for the Station, anyway) of including two plays by the same playwright in the same season. For 2016-17, the playwright in the spotlight was Conor McPherson, represented by The Night Alive in October and The Birds in November. For 2017-18, Lauren Gunderson, Manhattan Theatre Club playwright-in-residence, is the one who gets special attention, with her take on Jane Austen in Miss Bennet: Christmas at Pemberley as a holiday offering in December 2017 and Silent Sky, the true story of early 20th century astronomer Henrietta Leavitt, in February 2018. You'll notice that both works are not only written by a woman (Gunderson) but inspired by work of famous women (Austen and Leavitt) and they feature women characters front and center (Mary Bennet, the fictional middle sister in Austen's Pride and Prejudice, and the historical character of astronomer Leavitt). And they'll be directed by women, with Joi Hoffsommer at the helm of Miss Bennet and Katie Burke taking on Silent Sky. Bravo, Station!

There's more good news in the rest of the season, too, with lots of provocative and interesting choices that represent something a little different. Here's the full scoop on what you'll see at the Station Theatre in 2017-18: 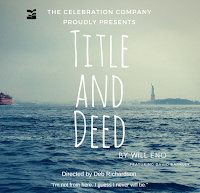 October brings Will Eno's Title and Deed, directed by Deb Richardson. Eno has emerged as a major voice in American theater since Thom Paine (based on nothing) in 2005, for which he was nominated for the Pulitzer Prize for Drama. He followed that up with the Horton Foote Award for Most Promising New American Play for Middletown in 2010. When Title and Deed played at New York's Signature Theater in 2012, Charles Isherwood called the play "gorgeously and inventively wrought, line by line." In that production, Irish actor Conor Lovett was the solo actor on stage, "recounting his past in another country and his present in a strange new one" in a meditation on roots and rootlesness, hope and hopelessness, and how we've all created and used language to try to give meaning to life. Lovett was directed by his wife, Julie Hegarty Lovett, at the Signature, just as the Station's Deb Richardson will direct her husband, David Barkley, for the Station. Title and Deed opens October 5 and continues through the 21st.

Small Mouth Sounds by Bess Wohl is next, directed by Jaclyn Loewenstein in performances November 2 to 18. If a great deal of Title and Deed is about words, Small Mouth Sounds is about the lack of them, as its six characters are attending a retreat where they're not allowed to talk. They may be silent for most of the play's 100 minutes, but they are communicating nonetheless. "Filled with awkward and insightful humor, Small Mouth Sounds is the unique and compassionate new play that asks how we address life’s biggest questions when words fail us."

Miss Bennet: Christmas at Pemberley arrives December 6, in good time for holiday entertainment. Gunderson's play (which usually gives a co-writing credit to former MTC Director of New Play Development Margot Melcon) focuses on bookish middle sister Mary Bennet and what happens to her two years after the "happily ever after" her sister Lizzie got in Pride and Prejudice. Mary and the other Bennets are gathering at Pemberley, the home of Fitzwilliam and Elizabeth Darcy, for Christmas, but often-overlooked Mary, who always has her nose stuck in a book, is not in a romantic frame of mind. Just in time, a suitor arrives -- Arthur de Bourgh -- an Oxford man, someone who is more sure of his intellect more than his heart, just like Mary. 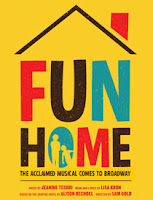 In January, we'll get our first area look at Fun Home, the Tony-winning Broadway musical based on an autobiographical coming-of-age graphic novel by Alison Bechdel. The brilliant (and very, very funny) Lisa Kron wrote the book and lyrics of the musical, while Jeanine Tesori wrote the music. Fun Home won the Best Musical Tony in 2015, along with awards for its score, book, leading actor Michael Cerveris and director Sam Gold. For the Station, Latrelle Bright will direct this "refreshingly honest, wholly original musical about seeing your parents through grown-up eyes" with performances January 18 to February 3, 2018.

Gunderson's Silent Sky follows, opening February 15 and closing March 3, 2018.  "A lovingly crafted period piece that imagines Leavitt’s inner world against the backdrop of World War I, Einstein’s discoveries and the suffragette movement, Silent Sky is an intellectual epic told on an intimate scale. Bottom line: Heavenly," wrote Wendell Brock for the Atlanta Journal-Constitution. After Henrietta Leavitt earned a bachelor's degree from Radcliffe College in 1892, she worked without pay as a "computer" at the Harvard College Observatory, studying photographic plates to determine the brightness of stars. Leavitt and the other computers worked with photographic plates rather than telescopes because women weren't allowed to use telescopes at that time. Although she toiled in obscurity and never reached any sort of fame, Leavitt was an important figure in astronomy history. She was "the woman who discovered how to measure the Universe."

Discovery is also at the heart of Cock, a play with a simple title that has engendered quite a bit of controversy. When Mike Bartlett's play -- about a man who thought he was gay but then cheats on his male partner with a woman, throwing into question what he thought he knew about himself -- premiered in London, it was called Cock. When it came to the United States, the New York Times wouldn't print the title, so it became The Cockfight Play. It stayed that way in LA, although Toronto and now Urbana are apparently sophisticated enough for the original Cock. In any event, this "comic discussion of identity and sexuality" will be directed by Rick Orr for the Station, with performances from March 22 to April 7, 2018.

The season will finish up with Tracy Letts' blistery family comedy/drama August: Osage County, which runs from April 26 to May 12, 2018. Mathew Green, who just finished up Jordan Harrison's Marjorie Prime August 12, will be at the helm of Letts' Pulitzer Prize winning play next spring. Although August: Osage County began its life at Steppenwolf in Chicago, its subsequent Broadway production ran for 648 performances and won five Tonys, including Best Play, Best Director (Anna D. Shapiro), Best Actress (Deanna Dunagan), Best Featured Actress (Rondi Reed) and Best Scenic Design (Todd Rosenthal). It may only be ten years old, but it's already a classic.

All in all, the Station is offering a compelling mix of words, wit, silence, science, family and fierce theatrical imagination. For more information, visit the main website here with tabs at the top for individual pages.
Posted by JulieK at 12:52 PM