Marion Davies in BLONDIE OF THE FOLLIES 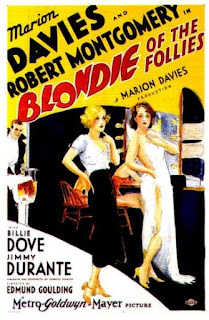 Although I am familiar with some basic info about actress Marion Davies -- that she was the long-time mistress of William Randolph Hearst, the inspiration for the Susan Alexander character in Citizen Kane as well as the whole Rosebud thing, and a talented comedienne who probably would've benefited from Hearst taking his mitts off her career instead of trying so hard to control it -- I haven't seen much of her work on screen. I think Cain and Mabel, a comedy she did with Clark Gable, is it as far as Marion Davies and I go.

That one didn't impress me much, but yesterday was Marion Davies Day on Turner Classic Movies and I thought maybe I should give her another chance. To that end, I sampled three of her works, The Red Mill, a silent from 1927 about a Dutch barmaid, Five and Ten, a weeper from 1931 about a dime store mogul and his unhappy family, and Blondie of the Follies, a 1932 cautionary tale about good girls who go bad for fame and fortune in the follies. I lasted less than a minute with Red Mill and maybe five minutes with Five and Ten. The former looked better than the latter in terms of production values, but they were both pretty tough sledding, even with Leslie Howard as Marion's romantic partner in Five and Ten. After bailing so quickly on both of them, I was determined to make it all the way through Blondie of the Follies.

It's interesting to note that both Davies and her costar, Billie Dove, really did have experience in the Ziegfeld Follies. Neither appears to be a singer or much of a dancer, but the numbers staged in the movie are so clunky -- one features three women, including Davies, clomping around and halfheartedly stabbing pirate daggers into the air as a showstopper of a dance move -- it's not like there was a whole lot of talent required. Dove, at least, shows presence. Davies, on the other hand, comes off as more of an oddity than a leading lady. She's not a glamor girl, not a coquette, not an ingenue, not much of anything except odd.

Throughout Blondie of the Follies, she is skittish and jumpy, with little hops and skips here and there for no apparent reason, awkward giggling that goes on and on, nervous clomping around on crutches (it's a plot point -- don't ask) and in general an absolute inability to make a scene feel genuine. The only place she really seems relaxed is when Jimmy Durante enters a party scene about 7/8 of the way through and the two of them spoof Greta Garbo and John Barrymore in Grand Hotel, which came out that same year and was also directed by Edmund Goulding. There is no explanation given for why the movie's plot is put on hold for this little trick, but Davies seems much more comfortable doing her Garbo impression than anything else in the film.

I did find Dove enjoyable as Blondie's BFF, and Robert Montgomery was his usual affable self as the romantic interest who provides conflict between the two pals. James Gleason and Zasu Pitts were also welcome additions as Blondie's weary dad and salt-of-the-earth sister.

As much as I'd like to blame Davies for the film's shortcomings, it's unclear if she was dancing as fast as she could to paper over the plot problems and inconsistency in tone or if that was the way director Goulding wanted it. And then, of course, it's also impossible to know how much William Randolph Hearst had to do with it. The picture was made by his Cosmopolitan Productions, after all, and there have been rumors that this was Billie Dove's last movie because she was so unhappy with how she and her role were treated, as Hearst pushed for changes to keep his Marion front and center. Who knows? The end result is a strange, jittery slog, too long, too forced, too... Marion.
Posted by JulieK at 8:52 PM