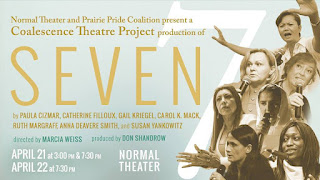 This weekend, Coalescence Theatre Project will present the Central Illinois premiere of the play Seven, a collection of pieces by award-winning women playwrights focusing on "true stories of seven women who bravely fought for the well-being of women, families, and children around the globe."

Called "a riveting piece of documentary theatre," Seven was created from personal interviews with women from around the world who have "triumphed over huge obstacles to create major changes in human rights in their home countries." From Afghanistan to Cambodia, from Guatemala, Ireland, Nigeria and Pakistan to Russia, these women take on domestic violence, human trafficking, poverty, education, peace and equality as they tackle the most human of human rights.

As the play's logo puts it, "Seven celebrates remarkable women changing the world."

This production, directed by Marcia Weiss and produced by Don Shandrow, will be presented at the Normal Theater on April 21 at 3 and 7:30 pm and April 22 at 7:30 pm. It is a joint presentation by the Normal Theater and Prairie Pride Coalition.

For more information, visit the Coalescence event page or this page devoted to Seven the play, with bios of the women and their playwrights, a gallery of images, and other details on where Seven has been and where it's headed. Anna Deveare Smith, who is probably the best-known among the playwrights for exactly this kind of theater, contributed the piece on Nigeria's Hafsat Abiola, who founded the Kudirat Initiative for Democracy to promote education and leadership opportunities for young women across Nigeria. Abiola became a human rights activist after the murder of both her parents, activists themselves. It's her kind of story that lights up the fire in Seven.

Tickets for Seven range from $5 to $7 and can be purchased in advance at the Normal Theater or at the door the day of the show.
Posted by JulieK at 11:03 AM