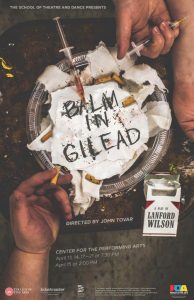 Lanford Wilson's Balm in Gilead occupies a special place in American theater history. It was Wilson's first full-length play, establishing him as a major voice in the 60s off-off-Broadway movement at  La Mama and marking a seminal point in off-off-Broadway history. It also created a major moment for Chicago's Steppenwolf Theatre when company member John Malkovich directed a production of the play in 1980, putting a national spotlight on Steppenwolf and actors like Gary Sinise, Terry Kinney, Glenne Headly, Jeff Perry, Joan Allen, John Mahoney and especially Laurie Metcalf, whose amazing monologue lit up the stage.

Since most of Steppenwolf's ensemble came from Illinois State University, a new production at the ISU Center for the Performing Arts makes perfect sense. It's a nod to ISU theater history, to some of its most notable alumni, and to the kind of rock-and-roll theatrical style that drove those alums into the national consciousness.

John Tovar directs the ISU Balm in Gilead that opens tomorrow night at 7:30 pm, with a large cast that includes Angie Milton as Darlene, a wounded, naive newcomer to the grungy all-night diner in Manhattan where the action is set; Steve Carr as Joe, a small-time drug dealer with a big problem and a big debt; Troy Schaeflein as Dopey, a junkie and something of a narrator; Tori DeLaney as Fick, a down-and-out addict; Betsy Diller as Ann, a former teacher turned street hooker; and Jack VanBoven, Dylan Dewitt and AnneMarie Owens as the cafe's manager, cook and server. Tino Avila, Abbie Brenner, Parker Carbine, Rashun Carter, Krystina Coyne, Taylor Eaves, Christian Frieden, Jeremy Gavin, Rondale Gray, Mikey Hendrickson, Malachi Hurndon, Will Olsen, Sarah Seidler, Clare Ellen Supplitt, Al Vitucci, Bobby Voss and Asa Wallace round out the ensemble as assorted users, pushers, hustlers, drunks, bad guys and whores who hang out there, with Katie Capp, Rachel Katz and Josephine O'Shaughnessy as a trio of rowdy children who make a scary Halloween run through the disarray.

Balm in Gilead runs at the Illinois State University Center for the Performing Arts from April 13 to 21, with evening performances at 7:30 pm and a matinee on April 15th at 2 pm. For more details or to reserve tickets, contact the CPA box office at 309-438-2535 between the hours of 11 am and 5 pm on weekdays. You may also purchase tickets online at Ticketmaster.
Posted by JulieK at 3:55 PM