It's a Date: SUBMISSIONS ONLY Comes Back March 3 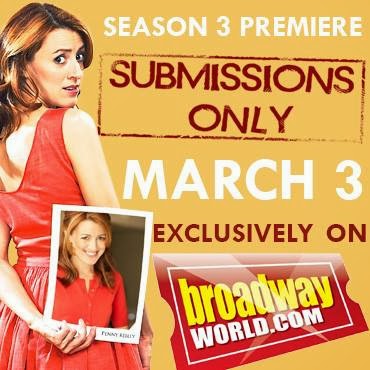 Not only do we FINALLY have a start date for season 3 of the web series Submissions Only, but we also got a nifty trailer to tease what's coming!

If you want to see the new trailer, you can see it on Youtube here. Excitement!

So what is Submissions Only and why am I so anxious for it to start again? It's billed as an "online sitcom about auditioning in New York City. Submissions Only follows a group of friends as they navigate the trips and falls, callbacks and train-wrecks experienced while working in this glorious business we call show."

It was created by Kate Wetherhead and Andrew Keenan-Bolger, and Weaherhead writes and stars as Penny Reilly, an actress who also works as a reader for auditions. Her pal Tim (Colin Hanlon) runs a casting agency, so Penny works for him, reading scripts opposite people trying out for whatever show they've been hired to cast. And Penny's agent, Steven (Stephen Bienskie), tries to get her roles so she won't be a reader her whole life. Steven is also Tim's ex, which can make things sticky, but Steven has a new boyfriend, the impossibly gorgeous Cameron (Max von Essen). We also see director Linda Avery (Anne Nathan) fairly often, as she hankers after male characters who are invariably gay, annoying Broadway star Serena Maxwell (Donna Vivino), Randall Moody (Jared Gertner), the most cheerful and fizzy Broadway boy ever who also works as a reader for Tim, a woman we know only as Adorable Girl (Annaleigh Ashford) and a snotty casting assistant named Donny, played by Andrew Keenan-Bolger, the co-creator who also serves as the show's director, editor and director of photography.

And that brings us to Aaron Miller, played by the adorable and wonderful Santino Fontana, who made a splash in shows like Sons of the Prophet and the current Cinderella on Broadway. Aaron shows up initially as a reader, a self-effacing sort of regular guy, but it soon becomes clear he is a very good actor, and he gets a major gig and a major girlfriend -- Serena Maxwell -- before Penny can really move on the fact that she likes him. As in likes him likes him. At the end of season 2, his big show had flopped and Serena was getting tired of him, moving him closer to Penny. Maybe.

If you need to catch up on the previous seasons or just refresh your recollection, including what went down with Aaron and Penny when last we saw them, all the episodes are available here. You can also check out who's who, read their press clippings, or tell them you like them on Facebook.