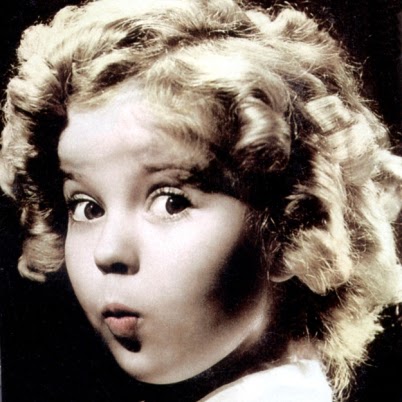 Shirley Temple was a huge part of my childhood. I was a movie-obsessed kid, anyway, and for some reason, I was most compelled by black-and-white movies from the 1930s. Maybe it's because the ones I liked best -- Fred and Ginger, "screwball" comedies, and, of course Shirley Temple -- served in the first place to entertain and distract people during the Depression, so they were really good at creating a world of their own. I was a child with a vivid imagination who loved books and movies that did exactly that.

For many of us, Shirley Temple's later films like The Bachelor and the Bobby-Soxer or That Hagen Girl, and even her career as a diplomat in later life (when she was Shirley Temple Black) just didn't make an impact. It was the precocious, bright-eyed, bouncy little girl in Stand Up and Cheer!, Little Miss Marker, Baby Take a Bow, The Little Colonel, Captain January, Heidi and The Little Princess who tapped her way into our hearts.

Yes, her dimples (and there was a movie called Dimples) and her golden curls (and there was a movie called Curly Top) were part of her appeal. And yes, her costars were first-rate, with stars like Adolphe Menjou (Little Miss Marker), Spencer Tracy (Now I'll Tell), Gary Cooper and Carole Lombard (Now and Forever), Lionel Barrymore (The Little Colonel), Joel McCrea (Our Little Girl), Guy Kibbee (Captain January), Frank Morgan (Dimples), Robert Young (Stowaway), Jean Hersholt (Heidi), and Jimmy Durante (Little Miss Broadway) floating through as the ne'er-do-wells, cranky grandparents, show-biz aunts and uncles and other folks eventually charmed by Shirley, with John Boles, Alice Faye, Jane Darwell, Randolph Scott and, of course, dancer Bill Robinson showing up more than once. But only Robinson really rivaled her on the screen. Otherwise, Shirley's effortless charm and amazing ability to knock out choreography stole the spotlight every time.

Her world was one where orphans found all kinds of parental figures waiting around the corner, show-biz was an easy nut to crack, and singing and dancing could fix just about anything. Songs like "On the Good Ship Lollipop" and "Animal Crackers in My Soup" helped form her film identity. And her movies were so popular they spawned not just the music, but a flood of merchandise, including dolls, paperdolls, dresses, books, toys, accessories, dinnerware (or at least breakfastware) designed for children, and a nonalcoholic cocktail -- ginger ale or 7-Up with grenadine to make it pink, and a maraschino cherry on top -- still on the menu in dinner theaters and supper clubs. She won a special Oscar -- a tiny one -- and got a life-size bronze statue on the Fox studio lot.

Yes, she grew up, and a grown-up (even teenage) Shirley was not the same dancing darling. She retired from films in 1950 at the age of 22, although she did continue to show up on television, narrating and appearing in her own show, Shirley Temple's Storybook, till 1961. Through two marriages and a new persona as a conservative politician, she managed to project grace and intelligence, and she never lost her trademark sparkle. Or her dimples.

Shirley Temple, the curly-haired tot, was magical to me, just as she was to generations before and after me. I had a picture of her looking feisty (seen above) in Little Miss Marker on the wall in my dorm room in college, and it seemed strange when my nieces, born 50 years after all those films from Fox, were just as captivated by the Shirley Temple ethos as I'd been. It probably seemed weird to my mother, who saw Shirley's movies in theaters when they were first released, that I was as captivated as she had been.

But that's the thing. Shirley Temple, movie star at the age of 4, dances on in our imaginations.
Posted by JulieK at 11:51 AM