Science fiction's highest honors, the Hugo Awards, were handed out last night in London at the World Science Fiction Conference, this year affectionately known as Loncon 3. 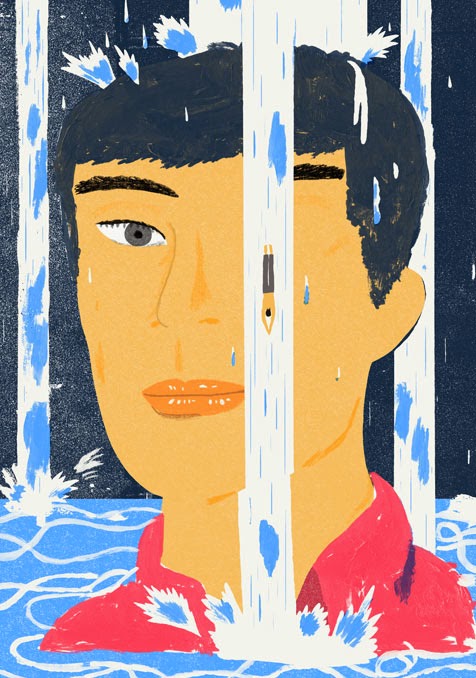 And I am happy to say that my friend, John Chu, took home the Hugo trophy for Best Short Story. It's a wonderful honor, much deserved for a beautiful story called The Water That Falls on You from Nowhere, published by Tor.

John gave a lovely, heartfelt speech, most of which is included in this Guardian article about the Hugos. John said, "When I started writing, so many people told me... ''I'm not racist, but…' or 'I'm not homophobic, but…' There were so many buts, and they all told me, in polite, civil and sometimes these exact words, that no one was interested in or would publish ever anything that I would ever write. So to win a Hugo, and for this story, I can't, I literally cannot put into words how much that means to me." He added, "Thank you to anyone who has ever said a kind word to me."

Bravo, John Chu! If you want to see exactly why he won, you can read The Water That Falls on You from Nowhere, a story that combines love, family, telling the truth and a meteorological rebuke for telling lies, at Tor.com. And if you want to see his speech or any other parts of the ceremony, the World Science Fiction Society has provided video of the event from start to finish here.

Kameron Hurley was a double winner, nabbing the award for Best Fan Writer as well as Best Related Work, which we won for an insightful and important piece called We Have Always Fought: Challenging the Women, Cattle and Slaves Narrative. The link here is to the article as it appeared on SFWA's site, but it was first published by A Dribble of Ink, the blog that won Best Fanzine.

And the John W. Campbell Award for Best New Writer, an award presented by Dell Magazines, went to Sofia Samatar, author of  A Stranger in Olondria.

To see a list of all the winners, visit the Hugo site here. To watch the Hugo awards ceremony, click here. Approximately the first 20 minutes are a slideshow of book covers and other relevant images, after which hosts Mur Lafferty and Sheila Williams begin the awards program.