It's an understatement to say that Philip Shaw was a major force in Bloomington-Normal theater.

As an actor, singer, director, playwright, composer, collaborator, mentor, colleague and friend, Phil played a huge role in many lives and many productions, adding an amazing amount of creative energy and too many memories to count to the local theater scene.

That's one of the reasons it will take three acts to stage a tribute to Phil, who passed away last February at the age of 65. As an Illinois State University student and alum, he was on and around their stages constantly. As one of the founders of Heartland Theatre, he launched an artistic home for countless local actors and directors. As one of the creative forces behind Send the Light, the documentary style musical drama about bringing electricity to rural communities, Phil illuminated the material with his joy and larger-than-life contributions. As an advisory board member and supporter of New Route Theatre, Phil once again generously shared his talents and his vision to make theater more accessible and more inclusive in Bloomington-Normal.

Given all of that (and countless more performances, directing gigs and contributions to theater around these towns), it makes perfect sense that Phil's family and friends would put on a show to pay tribute. What they've organized is a three-act memorial performance, including photos and presentations. No specific word has come out on what will be included, although Sally Sparks Hoffman Gowdy has talked about "breathtaking rehearsals" that include talented people like Jeni Bratcher-Crafton, Barb Lemmon, Rhys Lovell, Mario Mancinelli, Michael James McNeil, Kyle O'Daniel, Jennifer Rusk, David Shields, and Leslie and Rachel Sompong. It isn't at all surprising that a lot of people want to share their memories of Phil in the way he would've loved most -- on stage.

This Tribute in Three Acts tribute will take place at ISU's Center for the Performing Arts on Sunday, August 24, beginning at 1 pm. 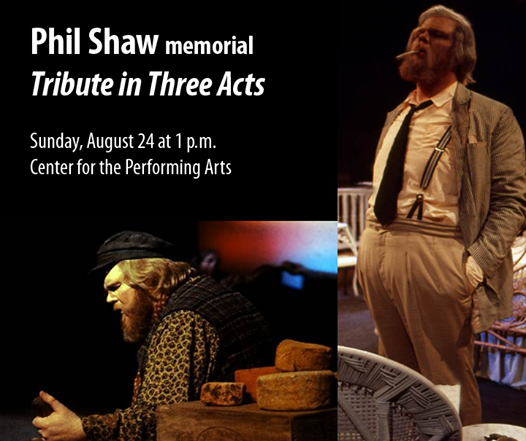