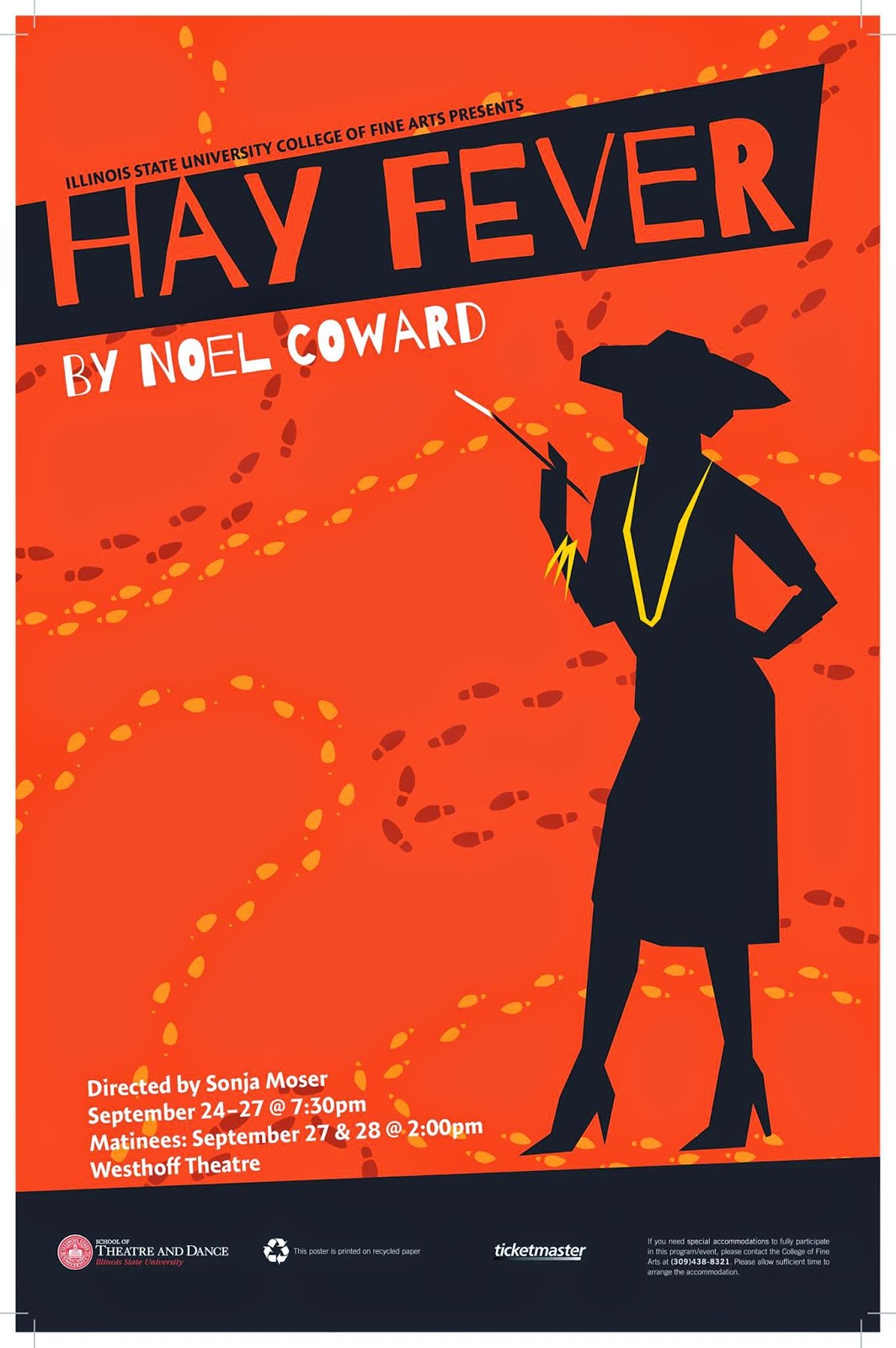 It's tough for today's young actors to pull off the sly and sardonic insouciance that oozes out of a Noel Coward play. Blithe Spirit, Design for Living, Private Lives... The characters live in a sophisticated, droll world where everyone is excessively witty, excessively self-involved and excessively crazy. These people don't talk, they banter or speechify. They don't walk, they saunter or stroll or float. And they don't sit -- they pose languidly against the nearest chaise longue.

All of those eccentricities are in full force in Sonja Moser's production of Coward's Hay Fever for the Illinois State University School of Theatre and Dance. Moser has put her cast through the paces to bring to life the swoony, swanny postures that signify Coward's world.

Hay Fever is set in the early 20s, in a country house a few hours from London. The Bliss family -- former theatre diva Judith; her husband David, a novelist; and their balmy children Sorel and Simon -- have taken up residence here, amusing themselves by bickering and fussing, playing parlor games, maybe indulging in a bit of tennis or punting up the river. Each Bliss has invited a guest from the the city for the weekend without telling each other or their put-upon maid Clara, who used to be Judith's dresser when she was on the stage. So into their midst stumble athletic young Sandy Tyrell, vampish Myra Arundel, proper diplomat Richard Greatham and sweet young flapper Jackie Coryton. At the mercy of the Blisses and their whims, each of the four guests get kissed by someone unexpected, some of them get accidentally engaged, and almost no one gets breakfast.

Among the cast, Bethany Hart stands out with her take on Judith, whose amazing eyelashes and histrionics land her somewhere in the area of Norma Desmond by way of Carol Burnett. Or maybe Alexis Carrington. Kaitlyn Wehr is perfect and perfectly lovely as Sorel, a fresh-faced Judith, Jr., while Colin Trevino-Odell knows exactly what to do with Richard, the stuffy diplomat who is way over his head in this bunch. The rest of the cast keeps the humor afloat, from Kyle Chandler Fitzgerald's goofy Daniel-Radcliffe-esque Simon to Eliza Palumbo's naive ingenue, Alejandro Raya's hale fellow well-met, Gabriela Rivera's sloe-eyed vamp, Lauren Sheffey's clumpy housekeeper and Nico Tangorra's twitchy novelist who doesn't know his Rue St. Honoré from his Rue Boissy d’Anglas. Special mention should be made of Anne Olsen, who comes on board with the world's least flattering headgear as Amy, an extra maid who is generally not on stage. Olsen gives this new character a real spark of insanity in just the right places.

Overall, this Hay Fever is funny and fresh, with a frisky pace that serves it well. Katie McCasland's charming, wrap-around scenic design puts some of the audience smack-dab in the action, properly framing the show and supporting its hijinks, while Jess Ray's costume design is both stylish and flashy in shades of red and purple, with especially entertaining looks for Judith and Sorel Bliss.

It looks great and moves well, and Pete Guither's piano playing as well as Wehr's performance of a pair of Gilbert and Sullivan ditties add to the atmosphere. I'd do away with the extended song that closes the show, however. It brings absolutely everyone back on stage to make fun of show biz and that doesn't really work in the context of the show or the action we've seen, even if it does give all the actors a chance to sing.

Opening night of Hay Fever was sold out, so you are advised to make a reservation for the remaining five performances.

Running time: 2:10, including one 10-minute intermission
Posted by JulieK at 3:08 PM