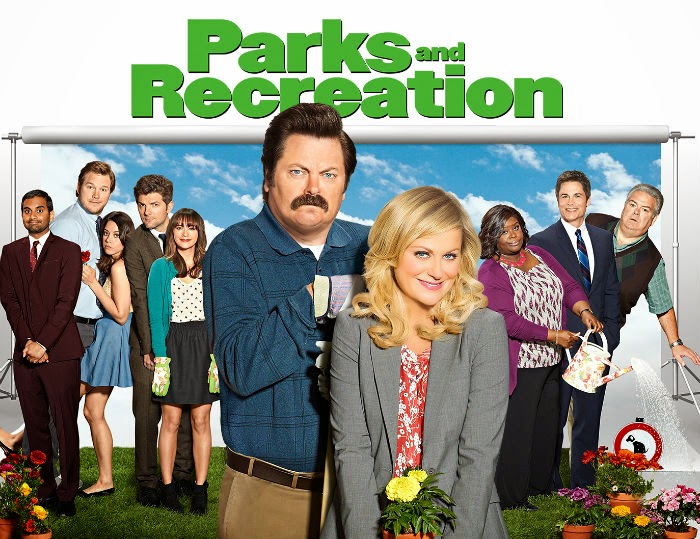 NBC's Parks and Recreation isn't ready to sing 5000 Candles in the Wind for the last time just yet, but it's hard not to think about how much we'll miss that crazy little show when it does spread its wings and fly from our televisions at the end of this season.

Although Parks and Rec was renewed early in 2014, its 2015 season will its last. And then we will bid a fond farewell to Pawnee, Indiana, and residents like Leslie Knope, the cockeyed optimist/go-getter played by Amy Poehler; her former boss, meat-and breakfast-lover Ron Swanson, played by U of I's own Nick Offerman; Leslie's sweet spouse Ben, numbers guy and inventer of The Cones of Dunshire, played by Adam Scott; odd couple April and Andy (Aubrey Plaza and Chris Pratt), office-workers Donna (Retta Sirleaf), Tom (Aziz Ansari) and Gary/Jerry/Larry/Terry (Jim O'Heir) and an assortment of nuts and bolts that has included Ron's ex-wives Tammy 1 and 2 (Patricia Clarkson and Megan Mullally), candy heir Bobby Newport (Paul Rudd) and real-life politicos like Joe Biden and John McCain. Oh, and Michelle Obama, who visited at the end of season 6.

At the end of last season, Leslie's BFF Ann Perkins (Rashida Jones) and perfectly perfect city manager Chris Traeger (Rob Lowe) had left Pawnee to raise their new baby elsewhere, but there are rumors they will make a return to say goodbye. Since Ann was there from the get-go, it would only make sense to see her again before it's all over.

In the meantime, Parks and Recreation will be back tonight for the first and second of its last thirteen episodes. Leslie and company will be jumping two years into the future to show us what happens when Ms. Knope takes a big promotion to the U.S. Park Service and brings the regional office she is now in charge of to Pawnee. Leslie and Ben have triplets, Jerry is now going by Terry, and Jon Hamm is on hand as an absolutely terrible employee Leslie has to fire.

Yes, there are two episodes tonight, and there will be every Tuesday between now and February 24. It's a brief blast of wonderful as we bid a fond farewell to our favorite Midwest municipal (and now federal) employees.


Maybe someday we'll saddle up again
And I know I'll always miss my horsiest friend
Spread your wings and fly...
Posted by JulieK at 1:39 PM