Tell us about the rabbits, George... OF MICE AND MEN Starts Thursday at Players

I'm afraid a variety of viruses descended upon my household just about New Year's Eve and as a result, I have neglected this blog. In my absence, Downton Abbey and The Good Wife have returned, the goofy Galavant has bowed, and the Golden Globes have globbed themselves all over our televisions.

But there's still a lot of January left and lots to look in on!

And first up is Of Mice and Men, the classic John Steinbeck story adapted by Steinbeck himself for the stage. The play bowed in San Francisco, closer to Steinbeck's home turf, first, moving to Broadway by November, 1937, in a production directed by George S. Kaufman for the Music Box Theatre. Broderick Crawford and Wallace Ford starred as Lennie and George, the pair of itinerant workers who form the nucleus of the story. Veteran actor Will Geer, who would go on to television fame as Grandpa Walton, played Slim, the mule-team driver and leader among the men on the ranch, while Leigh Whipper, the first African-American actor to join Actors Equity and one of the founders of the Negro Actors Guild of America, played Crooks, the one black worker among them.

Lon Chaney Jr. took over the role of Lennie when the play moved to Los Angeles, and he also appeared in the 1939 film version, with Burgess Meredith now playing George. Chaney went on from there to a parade of movie monsters like Frankenstein's monster and the Wolf Man, while Meredith became the Penguin in the purple top hat on TV, Rocky's crusty old coach on film, and the man with the thick glasses in one of the most famous Twilight Zone episodes ever. Leigh Whipper was the sole actor from the Broadway production to reprise his role on film.

Other actors of note who have played Lennie, the oversized "bindlestiff" -- what we used to call a hobo when it came time to pick Halloween costumes -- who has limited mental capacity, great physical strength, and a fondness for anything soft, include James Earl Jones, John Malkovich, Chris O'Dowd and Randy Quaid, while James Franco, George Segal and Gary Sinise have portrayed George, the smaller, smarter half of the duo. 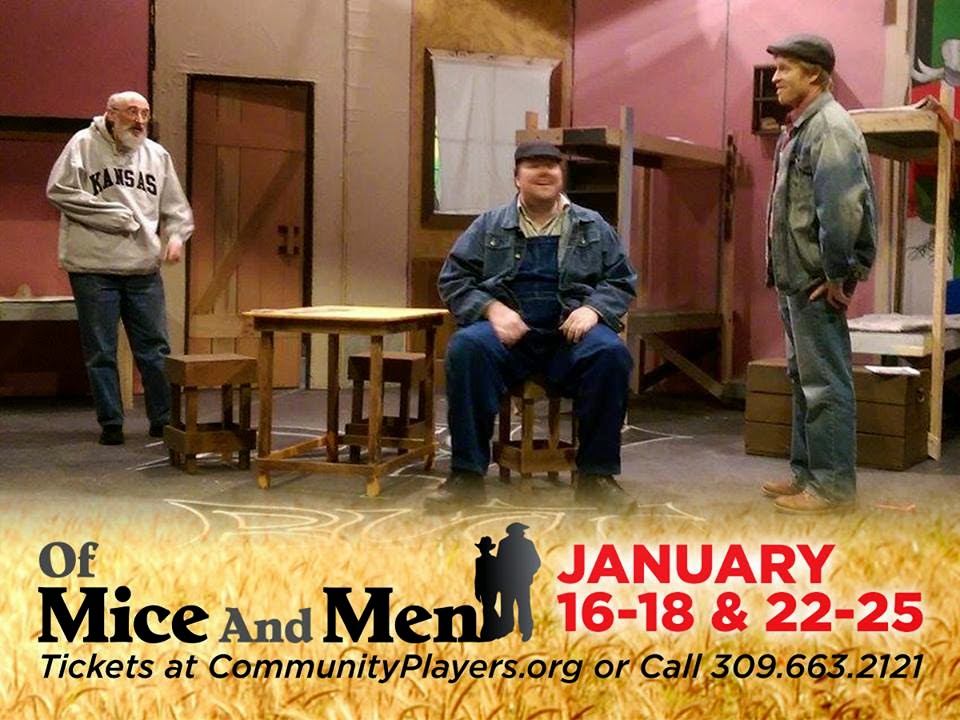 For the Community Players production opening January 15 with a special Pay What You Can preview, Penny Wilson directs Dave Krostal as George and Rick Clemmons as Lennie. Krostal is well-known to local audiences from performances in shows as different as Spamalot, Time Stands Still and A Tuna Christmas, while Clemmons is a stand-up comedian making his dramatic debut as Lennie.

For more information, including a link to buy tickets, click here for the show's Facebook page or here for the web page. Performances begin on the 15th and run through the 25th at Community Players Theatre on Robinhood Lane in Bloomington.
Posted by JulieK at 1:32 PM