Good news, musical fans! She Loves Me is coming back. With Josh Radnor and Laura Benanti!

Although this sweet little Bock/Harnick/Masteroff musical has on occasion been called the best musical of all time, it has never really been a big boffo hit with name recognition or tons of revivals. The source material, a Hungarian play called Parfumerie, spawned the much-beloved movie The Shop Around the Corner as well as lesser lights In the Good Old Summertime and You've Got Mail, showing there's staying power in the story of two feuding coworkers who don't realize they are also secret (romantic) pen pals. 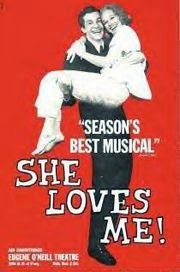 Still, She Loves Me was revived on Broadway in 1993 and given a starry one-night concert version in 2011. The concert was like a tryout of sorts, with How I Met Your Mother star Josh Radnor taking the role of Georg Nowack, the hardworking store manager who clashes with new employee Amalia Balash.

This week, it was announced that She Loves Me -- with Radnor as Georg, joined by Laura Benanti, the luminous Broadway star who's shown up on TV recently in Nashville, The Sound of Music, Nurse Jackie, Law and Order: SVU and The Good Wife -- will be back on Broadway in the spring of 2016. Will having a TV star like Radnor and a Tony winner with a good deal of TV visibility like Benanti in the mix make She Loves Me a hot ticket this time? The show made it to 301 performances in 63-64 and 354 in 93-94. It may be tough to break the one-year barrier in 2016, but hope springs eternal for this lovely little musical.

Scott Ellis, who directed the 1993 revival and the 2011 concert, will be at the helm of the 2016 Roundabout production, although there's no information so far on who will fill the musical's other roles. Victor Garber (probably best-known for Alias on TV and Lend Me a Tenor and Damn Yankees on Broadway) and Jane Krakowski (Ally McBeal and 30 Rock on TV and Grand Hotel and Nine on Broadway) played store owner Mr. Maraczek and shopgirl Ilona in the concert, and they would certainly be right for the full production, as well. Who else? Somebody from Newsies or Glee as Arpad the delivery boy? And speaking of Glee... Matthew Morrison was a Broadway star before he became Old Shoe Mr. Shue. He might make a nifty Kodaly.

If more casting news leaks, I'll update this post to include who's doing what.
Posted by JulieK at 2:40 PM