If you are a theater fan and you haven't heard of Noah Haidle, well, you really ought to get out more.
Haidle has been described as "precocious and formidably talented" as well as "the king of quirk" and (my personal favorite), "the overachieving young playwright formerly known for hyperintellectual insouciance."

His work has been seen around the world, from South Coast Rep in California to New York City to England and Germany, with a triumph called Smokefall that was so well-received that it closed and then came back a year later in a larger space at the Goodman in Chicago. Here is Haidle's official bio from the Goodman:


Mr. Haidle's plays have premiered at the Goodman (Vigils), Lincoln Center Theater, Roundabout Theatre Company, the Huntington Theatre Company, Long Wharf Theatre, Woolly Mammoth Theatre Company, South Coast Repertory, Rattlestick Playwrights Theater, the Williamstown Theatre Festival, the Summer Play Festival in New York City, HERE Arts Center, as well as many others around the United States and abroad. He is a graduate of Princeton University and The Juilliard School, where he was a Lila Acheson Wallace playwright-in-residence. He is the recipient of three Lincoln Center Lecompte Du Nouy awards, the 2005 Helen Merrill Award for emerging playwrights, the 2007 Claire Tow Award and an NEA/TCG Theatre Residency Grant. He is published by Methuen in London, Suhrkamp in Berlin, and through Dramatists Play Service in New York City. His original screenplay Stand Up Guys, starring Al Pacino, Christopher Walken and Alan Arkin, produced by Lionsgate and Sidney Kimmel Entertainment, opened in February 2013. Smokefall opened at South Coast Repertory in April 2013. He is currently working on commissions from Lincoln Center Theater, Yale Repertory Theatre, South Coast Repertory, and is set to direct his screenplay The Rodeo Clown, produced by Olive Productions and Mosaic. Mr. Haidle is a proud resident of Detroit.

The Goodman production of Smokefall is headed to New York in 2016, but Haidle's work has already been seen on New York stages. Mr. Marmalade, his play about a precocious 4-year-old with a wildly inappropriate imaginary friend, played off-Broadway at the Laura Pels Theatre in 2005 with Mamie Gummer (Meryl Streep's daughter) as the child and Dexter's Michael C. Hall as the title character. 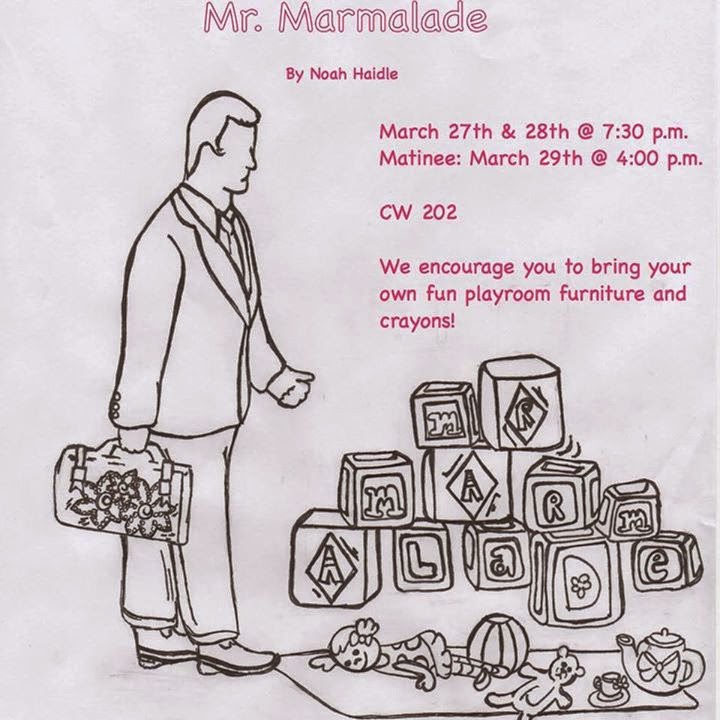 Mr. Marmalade and its twisted humor (built on a kid who imagines a companion with addictions to both cocaine and pornography) are perfect for Illinois State University's FreeStage program, which allows students to put on shows that color outside the lines. Coloring outside the lines is also perfect for this particular production of Mr. Marmalade, since director Kelsey Kott is inviting audience members to take crayons to her black-and-white show poster (seen below, colored in) and to bring play furniture and crayons to the show. 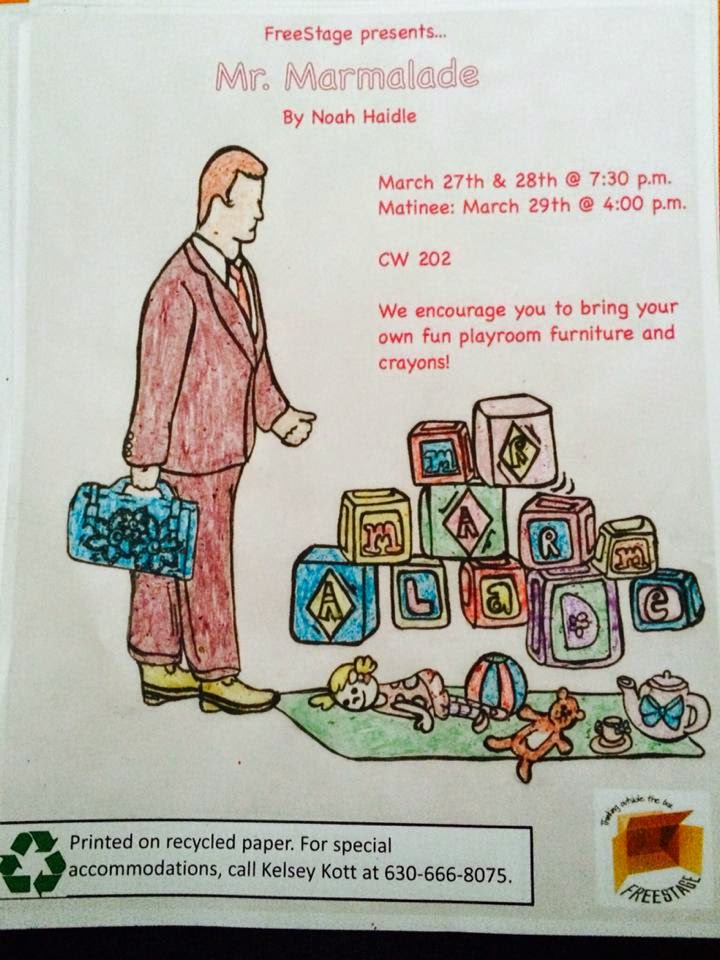 Doesn't that look like fun? You can add your own color to Mr. Marmalade this weekend, with performances at 7:30 Friday and Saturday and 4 pm Sunday in Centennial West 202. Admission is free, but seating is extremely limited (no more than 60 people per show) so you are encouraged to email Kelsey Kott at kmkott@ilstu.edu to reserve a seat.