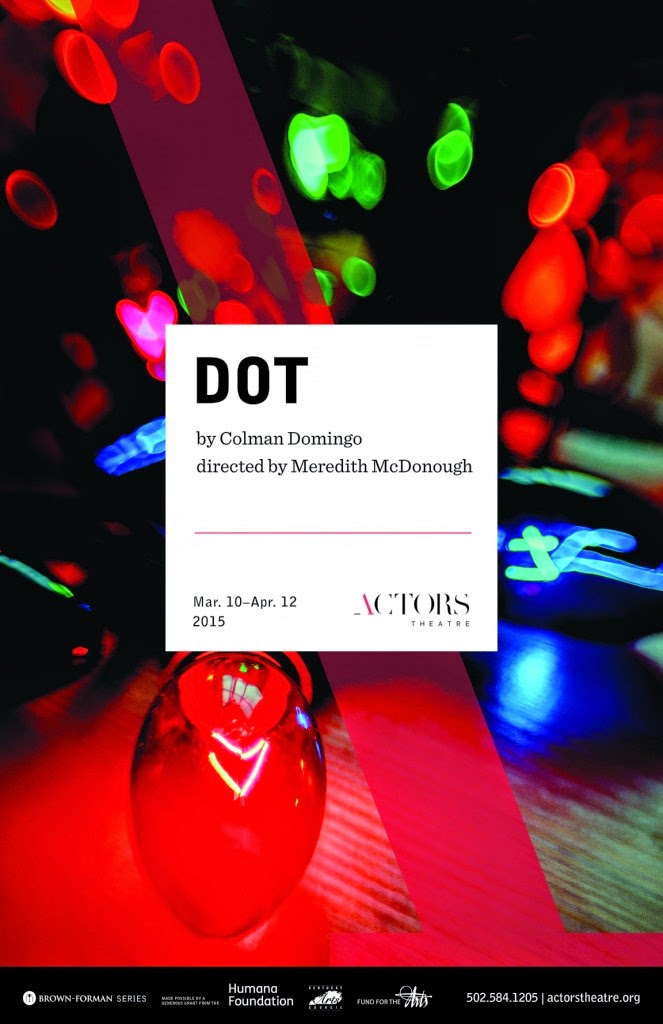 When submissions come in for Heartland Theatre's annual 10-minute play festival, it's pretty much a guarantee that there will be a substantial number dealing with Alzheimer's and dementia. Those are topics very much on playwrights' minds, very much part of the current zeitgeist.

Colman Domingo, the playwright behind Dot, perhaps the most approachable offering in this year's Humana Festival of New American Plays, has said he was influenced to write his play after watching four different friends deal with a parent with dementia or Alzheimer's. He noted that they found dark comedy in their crises, even as they all recognized "this huge elephant in the room about memory and change."

The Dot in the title is Dotty, a widowed mother with three adult children and one grandchild. She still lives in the same West Philly home where she raised her kids, in a neighborhood that is deteriorating around her in a clear parallel to her own declining health. Her oldest daughter Shelly, a Type A lawyer with a young son, has pretty much moved in to help Dotty, even though they are driving each other crazy. Dotty repeats the same questions again and again, forgets to eat, has acquired a new, salty vocabulary, frequently insults and annoys her daughter, and gets confused about who's who and whether her long-dead husband is still there.

Shelly thinks it's time to send her mother to assisted living, but Dotty has a different solution. She dropped a hint that it may be time to end it all, which freaked out Shelly and prompted her to demand that her siblings -- onetime golden boy Donnie, a gay playwright with a new husband but not a whole lot of money, and wannabe Youtube sensation Averie, who is so strapped she is living in Shelly's basement -- come back to the family home for Christmas and get behind her plan.

Along with Dotty's children, we see Jackie, a white girl as well as an old neighbor who was once in love with Donny, and Fidel, Dotty's undocumented Kazakh caregiver. Although Fidel is more low-key, the others are vivid, stubborn people, given to emotional outbursts and meltdowns, and Domingo's play throws us into their lives when the burners are already lit underneath them.

As directed by Meredith McDonough, associate artistic director at Actors Theatre of Louisville, Dot is lively and funny, with the anxiety underlying the comedy never far out of sight. McDonough's cast is strong, with excellent work from Marjorie Johnson as Dotty, veering from lucid and snappy to lost and confused; Sharon Washington as Shelly, the one who gets stuck with all the thankless work; Kevin R. Free as adorable Donnie, who has chosen the wrong time for a juice cleanse; Sean Dugan as Adam, Donnie's husband, a feisty redhead with a taste for flashy leisure wear; and Megan Byrne as Jackie, the other redhead and the ultimate outsider in this group, still feeling pangs of unrequited love for Donnie even as she deals with her own crisis. I also enjoyed Vichet Chum as Fidel, the sweet if inexplicable immigrant from Kazakhstan who stirs even more issues into the pot, and Adrienne C. Moore's energetic take on Averie, who blows into the house like a tacky hurricane.

The script's strength lies in its comedy and conflict, both timed well in this production, although it starts with its dial turned to 11, which doesn't give it much room to build. That leaves the second act feeling a little soft and unformed, with both Dotty's tape recorded speeches and Donnie's "dementia kit" moments feeling a bit preachy and out of place. Still, the moment when Dotty recreates a dance memory with Adam is lovely, heartfelt and an emotional highlight.

There is definitely heart in this portrait of an African-American family at Christmas, but at times it seems more superficial than it should, more cuddly and cute than real or revelatory. It was certainly warmly embraced by its Humana Festival audience, and its issues will continue to be of concern to those struggling to handle loved ones with dementia. Which is quite a large group, after all....
Posted by JulieK at 12:56 PM