"Hello Again" A Chilling Look at Lust and Lost Souls 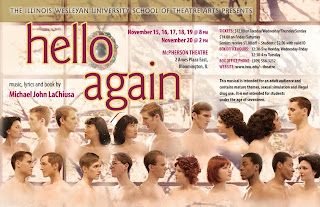 When I asked director Scott Susong about Michael John LaChiusa's "Hello Again," the dark, provocative musical about lust and sex now playing at Illinois Wesleyan's McPherson Theatre, he gave me a quote that neatly sums up this show. Susong wrote that he thought LaChiusa was drawn to the material because of "the lack of intimacy he found in a piece that is about ten sexually intimate encounters -- the lack of intimacy in intimacy."

"The lack of intimacy in intimacy" is at the heart of IWU's production, where ten characters meet up in couples and satisfy momentary lust, reflecting musically on what they think they want or need, even as they fail again and again to connect with each other emotionally. They are using each other sexually to try to feel something, but most of what they feel is emptiness or degradation. And when I said "use," I meant exactly that. The first woman we see is the archetypical Whore, played and sung beautifully by Laura Williams, and she wanders through scenes again and again, reminding us that these sexual encounters are about who is prostituting him or herself to try to get something or somewhere.

There's the 1890s Whore and a brutish Soldier, brought to chilling life by Chase Miller, who only gets more brutal when he moves to the 1940s and meets a naive Nurse, played by Patsita Jiratipayabood. The Soldier/Nurse scene is the harshest in the show, I think, although it's almost worse when the Nurse moves to 1962 and ties a doofus College Boy (Marek Zukowski) to a bed to have her way with him. It's as if the sweet, abused girl became an abuser herself after being raped by the Soldier back in 1942. 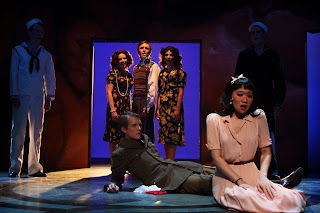 After that, it's more low-down, nasty sex between unhappy people, with the most meaningful moments coming when the characters remember, temporarily, that they have hearts. There's a striking stage picture when the Young Wife (benefiting from Amy Stockhaus's gorgeous voice), who considers herself "morally bankrupt," is haunted by the Whore, and sorrowfully sings about "Tom." 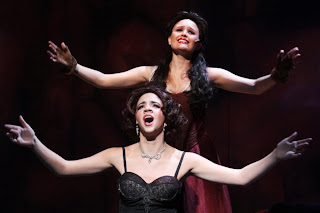 And when the Writer (given a cheery spark by Blake Brauer) brings a scruffy boy home from a Studio 54-ish disco in 1976, and the two immediately fall into meaningless sex, the Writer still imagines how it might be if the Young Thing were to wake up and feel something more. The Writer and the Young Thing (winningly played by Zach Wagner) share a very nice duet on "The One I Love" where they actually touch each other emotionally. But it's just a fantasy. And that's the tragedy. 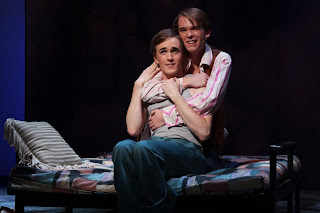 There are other tragedies, like a wealthy, chilly Husband (nicely brought to life by Josh Conrad, who also shines in other ensemble moments) inviting the less privileged Young Thing to his stateroom. On the Titanic. Even when the boat is sinking, the Husband can't break out of his emotional black hole long enough to save himself.

"The Bed Was Not My Own," with a confused Senator (played by Ian Coulter-Buford, also in fine voice, seen below with Annie Simpson) wishing there were more to life than brief encounters, is another highlight. 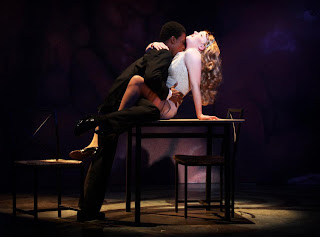 LaChiusa's music comes off more melodic and approachable than I'd expected, with the song "Hello Again" at the beginning and end to tie it all together.

If there is a weakness in the structure of the show, it's the very thing that makes it different. The "La Ronde" idea (based on Arthur Schnitzler's 1897 play), where one person from each couple moves forward into the next scene to pair up with someone else, who then moves forward to make the next couple, makes the libretto (and all the raw sex feigned for the audience) seem a bit repetitive and episodic. The sexual encounters are choreographed and staged precisely and sharply, so that the musical phrases are echoed perfectly in movement, but even so... The point that there is no intimacy in these more-than-intimate couplings doesn't need ten scenes to come across. Which is, again, why the songs that hint at something more stand out.

Susong has made each stage picture vivid, cast against a surreal pile-of-body-parts backdrop and a round playing space that works well with this waltz where everybody keeps changing partners. Curtis Trout's set design and its hidden doors and panels work very smoothly throughout. Marcia K. McDonald's costume design is equally evocative, cluing us in on the different decades these pairings inhabit.

All of the college-age performers do excellent work, committing themselves to difficult, complex material and tricky songs that require quite a range. In the end, "Hello Again" at IWU sounds fantastic, looks sharp, and definitely makes its case about the destructive power of focusing on genitalia to the exclusion of brains or hearts.

For more information or to make reservations, click here.

(Photos of "Hello Again" by Josh Levinson.)
Posted by JulieK at 5:24 PM