The Humana Festival of New American Plays is ongoing at Actors Theatre of Louisville, and I will be there myself this weekend, eagerly awaiting new plays by Sarah Ruhl and Steven Dietz, among others, but meanwhile, back here in Illinois...

Suzan-Lori Park's contemporary Scarlet Letter, In the Blood, continues at U of I's Krannert Center for the Performing Arts this week. Look for In the Blood tonight through Sunday.

This Thursday, Heartland Theatre and director Ron Emmons open A.R. Gurney's Love Letters, a sweet, funny play about a lifelong friendship and lifelong love, with the distance and tenderness of shared letters as the way Gurney spins his story. Emmons directs three different casts over three weekends, with Lori Adams and Jonathan Green in the roles April 7, 8, 9 and 10; Devon and Rhys Lovell April 14, 15, 16 and 17; and Cyndee and Dean Brown April 21, 22, 23 and 24. For details on performance dates and times, click here. For ticket information, click here. 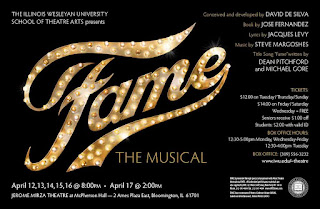 Fame: the Musical, is up next at Illinois Wesleyan University, with performances beginning April 12 and continuing through the 17th. Jean MacFarland Kerr is directing this updated take on the hit movie and TV show from the 80s, all about kids at a high school for the performing arts who hope to "light up the sky like a flame!" Except for the title song (with the bit of lyric I just quoted), the score and characters are new, developed and conceived by David De Silva. Kerr's cast of 20 is led by Evan Dolan, Conor Finnerty-Esmonde, Timothy Foszcz,  Holden Ginn, Emily Hardesty, Jenia Head, Jeffrey Keller, Chris Long, Haley Miller, Juna Shai, Steven Shur, Jessica Smith, LeeAnna Studt and Erica Werner. 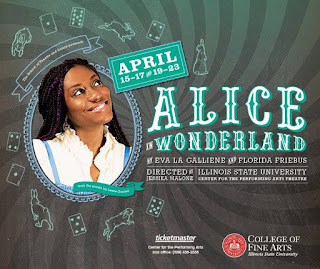 The Eva Le Gallienne and Florida Friebus version of Alice in Wonderland falls down the rabbit hole and takes a look at the other side of the looking glass in the Center for the Performing Arts at Illinois State University beginning April 15. Jessika Malone directs the mad, mad world of the White Rabbit (Sam Rosenfeld), Red Queen (Caitlin Graham), March Hare (RJ Secotte), Dormouse (Olivia Candocia) and, of course, Alice herself, (played for the ISU production by Shakeyla Thomas, seen above). There are individual posters and video pieces with the cast, who will be playing a whole array of characters, on the show's Facebook page. Alice in Wonderland opens April 15, followed by performances April 16 to 17 and 19 to 23. Click here for ticket info. 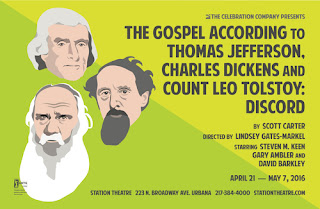 Over in Urbana, opening April 21, the Station Theatre offers The Gospel According to Thomas Jefferson, Charles Dickens and Count Leo Tolstoy: Discord, Scott Carter's meeting of the minds (or perhaps souls) of three very different thinkers trapped in an afterlife they can't escape. As Bob Verini said when he reviewed the play for Variety, "Carter couldn’t contrive a trio of distinguished historical personages more certain to piss each other off for all eternity." Lindsay Gates-Markel, who has played a whole lot of different roles on-stage at the Station, including Hamlet, directs Gary Ambler, David Barkley and Steven M. Keen as the three great men in question. 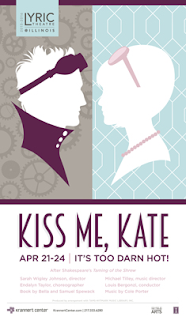 Also opening on the 21st is the Lyric Theatre @Illinois production of Kiss Me Kate in the Tryon Festival Theatre inside Krannert Center for the Performing Arts at the University of Illinois. Cole Porter wrote the score, while Bella and Samuel Spewak wrote the book for this Taming of the Shrew set on Broadway, where leading man and leading lady Fred Graham and Lilli Vanessi, who used to be married, are battling just as much as Petruchio and Kate in the musical they're supposed to be putting on. Add in some gangsters, a whole lot of dancing, and some pretty infectious songs, and you have Kiss Me Kate. Try this page for all the info. And, by the way, if you're wondering what Lyric Theatre @Illinois connotes, you can read all about it here.

New Route Theatre presents its brand-new "Voices of Pride" festival of new plays by LGBTQ playwrights April 22 to 24 at the First Christian Church, 401 West Jefferson Street in Bloomington. The plays selected include Garbage Can Blues by Paula Ressler, ReConnect by DC Cathro, Thingification by Durial Harris, and Bedfellows by Daniel Kipp. Duane Boutté curated the selections, and he will direct these staged readings of Ressler's and Harris's plays, while New Route artistic director Don Shandrow is at the helm of Cathro's and Kipp's pieces. Each play will be presented twice; to see the complete schedule, check out New Route's Facebook page. Tickets are available at the door for a suggested donation of $10.
Posted by JulieK at 4:23 PM