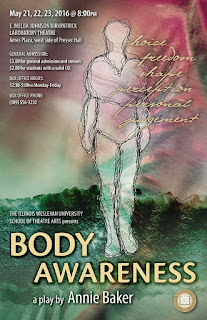 Annie Baker is at the top of the list when it comes to current American playwrights. Her voice as a playwright is understated, but distinct and uncompromising, with a reliance on silence, hesitation and rhythms that sound like people we recognize. In Central Illinois, Heartland Theatre and the Station have both done Circle Mirror Transformation, one of her trio of plays set in the fictional town of Shirley, Vermont, and farther afield, her Pulitzer Prize winner, The Flick, just enjoyed a successful run at Chicago's Steppenwolf Theatre.

The play takes place during "Body Awareness Week" at a fictional college in Shirley, Vermont. We meet psychology professor Phyllis, one of the organizers behind "Body Awareness Week," along with her partner Joyce, a high school teacher, and Joyce’s 21-year-old son Jared. Jared is smart, but he is also socially awkward, with enough issues that Phyllis and Joyce suspect he has Asperger’s. He is not in any way interested in therapy, although he would like to meet women. Uncertain how to approach that idea, he asks for advice from Frank, a photographer who is their house guest for the week while he serves as a visiting artist on the topic of Body Awareness. Frank specializes in nude photos of women, which does not endear him to Phyllis, who has social problems of her own, including being overbearing and pretentious. And Joyce is caught in the middle, trying to get along with everybody. Things are pretty tense from the get-go for this group, as you might imagine. For IWU, Emily Hardesty plays Phyllis, while Katelyn Van Petten takes the role of Joyce, Isaiah Rosales plays Jared, and Tuxford Turner is Frank.

For more information on the IWU School of Theatre Arts production of Body Awareness, click here.
Posted by JulieK at 1:06 PM