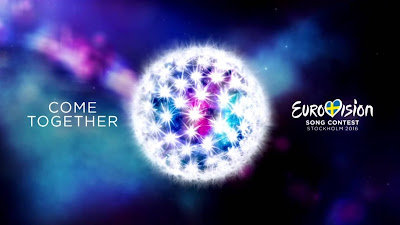 In case you have no friends in Europe who are into this sort of thing (and trust me, a lot of people in Europe -- and Australia and Israel -- are into Eurovision) let me just say that this super-poppy, super-competitive song blazes across Europe once a year. In the past, if you were in the United States and you wanted to see it, you had to watch on the Eurovision webpage or Youtube. But this year, for the first time, the Grand Final will actually be broadcast in the U.S. on the LOGO channel. Get ready, because the 26 performances -- singers flanked by dancers, projections, flames, lasers, sparkles, more lights than the Las Vegas Strip -- will begin at 2 pm Central time on LOGO.

Eurovision is all about the over-the-top, the intensely tacky, the intentionally wacky. And a whole lot of power ballads. Its most famous winners were ABBA, who won for Sweden in 1974 with "Waterloo," and Celine Dion, who sang something called "Ne partez pas sans moi" for Switzerland in 1988. The first winner, back in 1956, was also Switzerland, with "Refrain," sung by Lys Assia.

Other winners of note include Lordi, a supposedly heavy metal band from Finland who were covered in costumes that wouldn't have looked out of place in Battleship Earth, Ruslana, a beautiful woman representing Ukraine who wore torn bits of leather and fur for her performance of "Wild Dances," and in 2014, a man who competed for Austria under the name Conchita Wurst with an outfit that combined a beard and an evening gown.

This year's favorite is Russia, with Sergey Lazarev singing "You Are the Only One," accompanied by projections of giant wings and what I think may be ice chunks that he climbs. Ukraine, which has a strongly political song called "1944," sung by a Crimean Tatar named Jamala, is also in the final and expected to do well, as is Australia, whose Dami Im is singing "Sound of Silence."

Sweden is the defending champ, which is why this year's festivities are in Stockholm. Sweden's 2016 entry is a teenager named Frans offering the earnest "If I Were Sorry."
Posted by JulieK at 12:02 PM