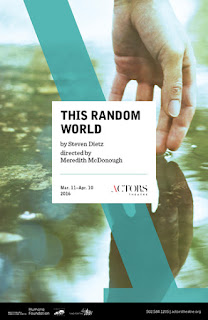 Playwright Steven Dietz is both prolific and versatile. His plays range from God's Country, a scary, fact-based exposé of white supremacists in the Northwest, to Private Eyes, a theatrical and romantic play that peels away layers of lies and fantasy around lovers who also happen to be actors, Lonely Planet, which piles up chairs to talk about AIDS, adaptations of Dracula and Ibsen's An Enemy of the People, several musicals, and Bloomsday, the recent Steinberg/ATCA citation winner that deals with two mismatched people who meet on a tour of Dublin centered on James Joyce's Ulysses.

You'll see a lot of relationships, especially thwarted or flawed relationships, in Dietz's plays, as well as a message about getting out in the world and actually living life. That's certainly on display in This Random World, the play Dietz premiered at last month's Humana Festival of New American Plays. The play's subtitle is "the myth of serendipity" and that describes This Random World rather nicely, as a collection of sweet, nice, eccentric people fail to connect with each other, often passing like ships in the night.

There's sister and brother Beth and Tim -- she's taking a trip to Nepal in an attempt to LIVE before she dies, while he's a stay-at-home guy who has failed at love and work and isn't quite ready to push past his perceived failures -- and their mother, Scottie, whose life is a lot more interesting than her children think. Around their axis spin Bernadette, Scottie's warm and competent aide; her sister Rhonda, who works at a funeral home; Tim's ex, loopy Claire; and Gary, Claire's current boyfriend who is about to break loose.

Their plotlines intersect, but never really connect, and that kind of almost-but-not-quite is Dietz's main point. He sets up the standard dramatic expectation that when these characters finally meet, there will be dramatic sparks and a POW! SOCKO! payoff. But that's what Dietz is exploring, the notion that serendipity is more likely to make us miss each other than collide.

And so This Random World actively and purposely avoids the expected payoffs. Or, as Actors Theatre of Louisville's materials on the play frame it: "Mining the comedy of missed connections, This Random World asks the serious question of how often we travel parallel paths through the world without noticing." In that way, This Random World ends up giving its audience the same "if only" ache the characters feel. It's a whole lot more satisfying than you might expect from a play that sets out to leave its characters unsatisfied.

In its Humana Festival production, This Random World was lovely and real, quite funny and quite sad. Part of that is on the page, as Dietz and the surprises he built in keep the characters and action moving smoothly.

And part was due to director Meredith McDonough's inventive staging, which employed a stream of costumed stage hands from Actors Theatre's apprentice company sliding in, out and through the Bingham Theatre's in-the-round space between scenes, showing us more of those people traveling "parallel paths through the world" even as they seamlessly changed the scenery. It was a neat trick that underlined the central idea.

McDonough's cast did fine work across the board, with Beth Dixon terrific and vivid as Scottie, who knows her own mind and brooks no objections, and Deanna Bouye a delight as Rhonda, the one who thinks it's perfectly normal to offer coffee to a spirit who just walked in the front door. Nate Miller's Tim and Renata Friedman's Claire were also appealing and absolutely believable.

Dietz's plays have enjoyed a great deal of success in regional theaters over the past thirty years. Let's hope This Random World shows up, too. I'd like to see it ten or twelve more times, myself.
Posted by JulieK at 3:16 PM