LOU GRANT Is FINALLY Available on DVD (Season One, Anyway) 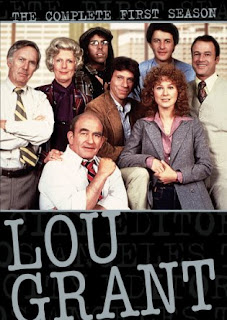 As other acclaimed shows from the 70s and 80s have been released on DVD, fans of Lou Grant have been wondering when their turn will come. The answer is now, at least partially, as Shout! Factory is offering Season One of Lou Grant right now, with Season Two lined up for release in August.

Lou Grant spun off Lou (the character, played by Ed Asner on both shows) from Mary Tyler Moore, where he was the crusty boss in Mary's TV newsroom. Mary Tyler Moore was a half-hour comedy, one of the best TV comedies of all time, and it firmly established its eccentric, lovable characters, three of whom went on shows of their own. It seemed natural for MTM to spawn comedies like Rhoda and Phyllis, but Lou was the only one who got an hour-long drama. He was sent from MTM's Minneapolis to Los Angeles, and from a TV newsroom to a print newspaper, which had been part of MTM's Lou's back story. And for playing Lou, Ed Asner became the only actor to take home Emmy Awards for playing the same character in a comedy and in a drama.

As a newspaper drama, Lou Grant sent reporters Billie Newman (Linda Kelsey) and Joe Rossi (Robert Walden) out to cover topical issues like homelessness, racism, obscenity, teen pregnancy, runaway crime in a high school, and -- in the very first episode -- police corruption and a reporter's too-cozy relationship with the "Cophouse." The Los Angeles Tribune's owner, Mrs. Pynchon, played by the wonderful Nancy Marchand, often came into conflict with Lou and his methods, and even managing editor Charlie Hume, played by Mason Adams, the one who hired Lou, found himself at odds from time to time. It was great stuff, with good acting all-around and terrific individual stories.

When I was in law school, I remember being called for a survey by some group called the Tolono Busy Bees (the voice was definitely a child and I took them to be some kind of service organization for kids, like Scouts, from Tolono, Illinois) while Lou Grant was still new. They asked one question -- what my favorite television show was -- and before the words were even out of the child's mouth, I was jumping in with Lou Grant. I loved it, I loved Ed Asner's performance, and the supporting cast and guest stars were always a delight.

Over its run from 1977 to 1982, when rumor had it CBS unceremoniously canceled the show because of Asner's outspoken political beliefs, Lou Grant won 13 Emmys, a Peabody, two Humanitas prizes, a pair of Golden Globes and three Directors Guild Awards. Ed Asner won two Emmys as Best Actor in a Drama, while Nancy Marchand's performance as the formidable Mrs. Pynchon earned her four Best Supporting Actress Emmys.

Some of the highlights of the first season of Lou Grant include "Cophouse," mentioned above, "Hoax," a bit of a caper involving Lou with a disreputable old friend who claims to have a hot tip; "Nazi," about neo-Nazis in Los Angeles, with Brian Dennehy and Peter Weller in the cast; "Barrio," revealing the newspaper's lack of coverage of important stories if the people involved are Hispanic; "Judge," which earned Barnard Hughes an Emmy for his guest performance as an erratic judge who puts Lou in the clink for contempt of court; "Psych-Out," where Rossi goes undercover to investigate a mental institution; "Housewarming," where Billie looks into domestic violence, with Julie Kavner as a guest star; "Airliner," bringing the news home for Charlie, whose daughter is on a plane experiencing technical problems in the air; "Sports," where the paper looks into rumors of recruiting violations at a local college athletics program; "Hero," posing a mystery about a lifesaver who doesn't want any recognition; "Renewal," a memorable episode with Robert Earl Jones as an elderly man whose building is about to be razed, causing him a great personal loss; "Poison," about a nuclear plant that may be unsafe; and "Physical," the season finale that gives Lou gets a scary diagnosis.

Lou Grant: Season One is now available directly from Shout! Factory as well as Amazon and Barnes and Noble.
Posted by JulieK at 4:10 PM