What's Up from Prairie Fire the Rest of 2017

Prairie Fire Theatre's 2017 season is well underway, with their Champagne Gala last month and this month, the return of the children's opera project that tours area schools. After that, they'll finish up 2017 with a classic musical later in the summer and a revue about romantic hopes and mishaps in the fall.

This year's children's opera, once again written by Nancy Steele Brokaw, is The Last Book on Earth, and it involves three young friends intent on saving all the books in the world from a dark force called The Blank. There's a magic bookshop, storybook villains, hidden talismans and something called A Dangerous Book that our heroes must leap into to begin their mission. The Last Book on Earth has already performed two public performances at the Normal Public Library and the Unitarian Universalist Church, with the third scheduled for tonight at 6:30 pm at the Bloomington Public Library. For more information, click here.

In August, Prairie Fire returns with The Most Happy Fella, the 1956 Frank Loesser musical that "tells the heart-stopping story of unlikely love that blossoms in Napa Valley." Its original Broadway production was nominated for six Tony Awards, but it was the 2014 City Center Encores! production with Shuler Hensley, Laura Benanti and Cheyenne Jackson that impressed critics like the New York Times' Ben Brantley. You'll recognize the song "Standing on the Corner," the one where the guys are "watching all the girls go by," in Loesser's "sweeping, seamless and intricately layered score." Performances are scheduled from August 3 to 6 in Westbrook Auditorium inside Illinois Wesleyan University's Presser Hall. 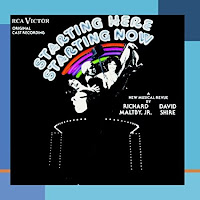 And the last show of the Prairie Fire season will be Starting Here, Starting Now, a Maltby and Shire revue made up of story songs on the general subject of love and romance. In the first act, we hear about the challenges of finding love in the city, while the second turns to people who have stumbled in pursuit of romance but have hopes of new beginnings. It will be performed on October 20 and 21 in IWU's Young Lounge in the Memorial Center. (The image you see here is from the 1977 off-Broadway original cast recording. That production starred Loni Ackerman, Margery Cohen and George Lee Andrews.)