From time to time, my friend Jon Alan Conrad is inspired to write a guest piece for this blog, which makes me very happy indeed. Jon is always insightful and immensely knowledgeable. Who wouldn't be delighted to offer a forum for his writing?

Here's Jon's take on The Golden Apple, which he recently saw as part of the Encores! series at New York City Center. 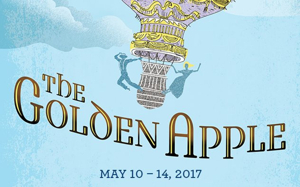 We lovers of musical theater finally saw our long-standing wish granted in May 2017, when the series "Encores! Great American Musicals in Concert" marked the end of its 24th season with a production of The Golden Apple.

For an explanation of "Encores!" I'll save space by referring to my previous column about an earlier production of theirs, commenting in addition that their events long ago stopped being "concerts" in any sense beyond the orchestra's presence onstage. (Apparently their standard Playbill caveat, that the performers might carry their scripts, now contractually frees them from actually doing so.) As to "our wish," naturally I can't speak for everyone. But subscribers, watching the list of "Encores!" titles (here  -- or here, if you enjoy a quiz format) mount up over the seasons, have indulged in a fan's privilege and dreamed up lists of future possibilities. And although we've seen some gratifying rarities over the years -- St. Louis Woman, Ziegfeld Follies of 1936, Gentlemen Prefer Blondes, Paint Your Wagon are four that they also recorded -- many wish lists (Cynthia Nixon's, for one) kept The Golden Apple at the top.

The Golden Apple itself? It's a collaboration between lyricist John Latouche (remembered for his contributions to Cabin in the Sky and Candide) and composer Jerome Moross (probably best remembered for epic movie scores like The Big Country. There's no speaking, or even operatic talk-singing (recitative); it's all in song forms, ranging from that sweeping Americana sound heard in Moross's movie work to vaudeville, blues, soft-shoe, and ragtime.

And that's not all. In this compact two-hour opera-musical, Latouche and Moross retold the Iliad and Odyssey, setting it in Washington State (near our own Mt. Olympus) around 1900. At the start, the boys come home from the Spanish-American War to small-town contentment, until farmer's daughter Helen runs off with traveling salesman Mr. Paris in his hot-air balloon. The guys, having pledged to take care of her, troop off to the big city to bring her back. She returns with husband Menelaus readily enough at the start of Act II, but that leaves the men still far from home, susceptible to the perils of the Odyssey -- Calypso, Scylla-Charybdis, Sirens, Circe -- embodied as the temptations of the coming century -- status, wealth, sex, power -- until everyone has vanished except Ulysses, who comes to his senses and returns home to Penelope.

All this playful classicism was catnip to the critics when The Golden Apple opened at the Phoenix Theatre in March 1954 (one of the first off-Broadway musicals) as part of its repertory season. A transfer to Broadway to capitalize on its cult popularity with a longer run seemed a good idea, but after opening at the Alvin Theatre in April, it managed only 125 performances, leaving behind the published play and a highly truncated recording of highlights, mementos that fail to convey its stature and expansive musicality. But surviving photos and accounts suggest a jewel of an original production, elegantly designed and directed, and cast with great care. The folksy tunefulness in Act I creates a lovely picture of small-town life, blossoming into expansive moments like Ulysses and Penelope's duet of marital contentment, "It's the Going Home Together," or Helen's sultry seduction of Paris (and a favorite of song stylists ever since), "Lazy Afternoon." Then in the new big-city atmosphere of Act II, vaudeville specialties (starring the folks from Act I in new guises) pop out, like the slick vaudevillian "Scylla and Charybdis" routine promoting the stock market, and the hula-flavored enticements of "Goona Goona Lagoon." An interlude with the waiting Penelope gives us the soaring aria "Windflowers," and the final unsure reunion the impassioned duet "We've Just Begun." By the end, we've had a colorful experience that retold a classic tale in a witty way, and we've also learned something about ourselves. What more could you ask for?

Somehow, while other ambitious shows from the 1950s remain well-remembered, and while regional opera companies search for popular-flavored classics to fill out their seasons, nobody seems to know about, or want to produce, The Golden Apple. Even the recent release, at long last, of a full-length recording, welcome as it is, hasn't seemed to change this situation much.

So the Encores! production meant more than just the chance to see an insider's seldom-seen title: it showed the world what a fine piece of writing it is, and maybe it can persuade managements to stage more productions of it, and let its take its rightful place among the masterpieces of popular musical theater.

Presentations like the one I saw on May 13 (partway through a run of seven performances) will go a long way toward raising awareness of it, and promoting a wider fondness for it. It was certainly given the full treatment, with the biggest chorus the series has employed, multiple costumes for everyone, some evocative if skeletal sets, and no cuts whatever. Michael Berresse, having brightened several past entries as a performer, directed with fine attention to both character and theatrical effect (aided by choreographer Joshua Bergasse), and the Encores! Orchestra sounded its customary best under Rob Berman's reliable baton, doing justice to Moross's own orchestrations (assisted by Hershy Kay), among the most gorgeous written for the theater.

Some Encores! productions have provided all-star casts to enjoyable effect (like their No, No, Nanette with Rosie O'Donnell, Sandy Duncan, Beth Leavel, Charles Kimbrough, and Mr. Berresse), but The Golden Apple followed the other possible pattern, assembling an ensemble cast suitable for a real production. (And thereby eliciting a fleeting wish that they could just stay together and settle in for a long run.) There was not a single weak element anywhere, so instead of coming up with a varied series of commendations for every name in the cast, I'll link to a personnel list, a photo gallery , and two montages of in-performance videos to give the details and establish the general excellence. That will allow the mention of just a few outstanding participants without seeming to criticize the others. For instance, the sinister Hector Charybdis who appears in Act II as mayor and guide to temptation was suavely embodied by Jason Kravits, familiar as countless sleazy lawyers and judges on television but clearly an old hand with a top hat and a cane. The trio of local "goddesses" (Miss Minerva, Mrs. Juniper, and Lovey Mars) whose rivalry ignites the plot, and who transform into temptations in Act II, were delightfully embodied by Alli Mauzey, Ashley Brown, and Carrie Compere. Ryan Silverman supplied a mellow baritone and the right reckless confidence as Ulysses. Especially memorable were two actresses new to me: Lindsay Mendez (well known to fans of Wicked, but not previously to me), sultry and giddy as needed for Helen, and Mikaela Bennett (unknown to most of the audience, I dare say, as her Juilliard graduation was still a week in the future) bringing a richly soaring soprano to Penelope. Both ladies had the special spark that can make time stand still -- a most welcome illusion, because I didn't want the show to end, ever. Let's hope that everyone's local theater company becomes motivated to schedule a production next year.
Posted by JulieK at 6:42 PM