SPEECH & DEBATE on Screen (on iTunes) 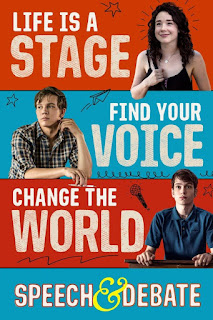 A film version of Stephen Karam's Speech & Debate is now available to rent through iTunes. Karam wrote the screenplay for the film based on his own play, which opened Off-Broadway in 2007 as part of the Roundabout Underground initiative.

Speech & Debate, the play, has been well-performed since then, including at Urbana's Station Theater in 2008 and at Illinois State University in 2011.

Speech & Debate involves three teenagers in Oregon, none of whom exactly fit in. Diwata is overflowing with the desire to PERFORM!, Howie is gay and looking for a way to express that at a hostile school and Solomon sees himself as a crusading journalist. Together, they revive their school's moribund debate club to expose the hypocrisy and perfidy of the adults around them. By turns, they're funny, wounded and outrageous, especially when they perform a musical with a witch from The Crucible time-traveling to meet a gay, teenage version of Abraham Lincoln.

Sarah Steele, an actress you may recognize from her role as Marissa Gold on The Good Wife, played Diwata in that Roundabout production ten years ago, and she is back as Diwata for the movie. She's joined by Liam James (The Family) as Solomon and Austin P. McKenzie (he played Melchior in the Deaf West production of Spring Awakening on Broadway) as Howie.

Karam and director Dan Harris have opened up the stage play, which showed only the three high school students and one adult, at least far enough to include space for actors like Skylar Astin, Roger Bart, Janeane Garolfolo, Wendi McLendon-Covey, Kal Penn, Gideon Glick (who played Howie in the original production), and Lin-Manuel Miranda as part of the tableau.